VALERY KOSHLYAKOV
We Have Never Stopped Building Utopia
11. May – 29. June 2017
Ca’ Foscari Esposizioni, Venice
in cooperation with the Museum of Russian Impressionism, Moscow and Ca’ Foscari University’s Centro Studi sulle Arti della Russia (CSAR).
a large-scale solo exposition at Ca’ Foscari Esposizioni returning to the shores of the Venetian Lagoon, where in 2003 he represented Russia at the 50th Venice Biennale.
Koshlyakov is rightly considered one of the most respected and interesting figures in Russian contemporary art. His works have been shown in the major museums of Russia, Europe, and the United States, including the Louvre, the Guggenheim Museum in New York and Guggenheim Museum Bilbao, the MACRO in Rome, Centre Pompidou, the Pushkin Fine Arts Museum, the Tretyakov Gallery, and, of course, the Museum of Russian Impressionism, which recently staged a solo show by Koshlyakov and has collaborated on the new show in Venice.
Koshlyakov was born in 1962 in the city of Salsk, Rostov Region, and studied at the Rostov Art College. In 1998, he joined the group Art or Death, which brought together young Russian artists of the new era.

Koshlyakov’s large canvases record images of internal disintegration, of things that have survived turmoil and shock, and frozen into classical ruins, as if trapped in empty monumental shells. The phantasms of cities, peoples, and eras succeed each other, the outward guises of an art that relentlessly demands the incarnation of Utopia. They are memories and daydreams in which the reality of landscape is imbued with the hunger for a miracle come true. The Kremlin, Notre Dame, the Colosseum and the Parthenon, the ruins of Pompeii, and Stalin-era buildings are the places we identify in Koshlyakov’s paintings, where they walk the fine line between dream and reality. Here, these magnificent buildings take on the vague aspect of ghostly ruins. By blurring the outlines of civilization’s great monuments, Koshlyakov seemingly reveals their true essence, attempting to capture the fragility of the utopian dream and the greatness doomed to inevitable disintegration that we find in these mighty symbols of power.
In this sense, Venice itself, with its magnificent borderline splendor, harmonizes perfectly with Koshlyakov’s grandiose pictures of magnificent decay. The Venice show will feature works dealing with this fabulous city on the water and its famous palaces. Moreover, the subject of architecture and palace interiors, whether Muscovite or Venetian, is the exhibition’s backbone. Koshlyakov’s large paintings resemble, rather, stage scenery, as if we were in the audience at a play entitled The Seven Sisters of Moscow, in which the starring roles were played by Moscow’s famous Stalin-era skyscrapers, exemplars of socialist classicism. In a sense, we can talk about gigantism in Koshlyakov’s work. Employing a variety of media, including cardboard, packing tape, plastic, and metal, his magnificent panoramas generate an impressive space that captivates the eyes and imaginations of viewers. 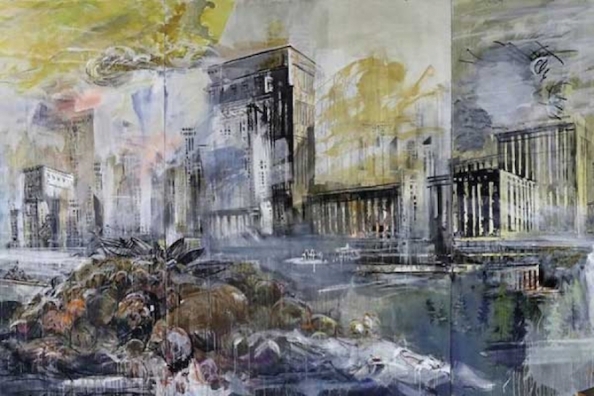 “All of Koshlyakov’s work teeters on the edge of instability and fragility, the nervous oscillation between high culture’s refined nobility and the brutal reality of garbage, between a conscious pride in possessing all the riches of the historical legacy and the capacity to hear the ruthless rattling of the present day. Skilled at generating forms and spaces, this master is not afraid of rude means of expression. His person combines the subtle poet and the savage warrior,”
writes Danilo Eccher.
Two floors of the gallery space at Ca’ Foscari University will house large-scale paintings, sculptures, and art objects. The show’s curator, Danilo Eccher, is well known in Italy, having worked in the past as director of some of the country’s major contemporary art museums. Eccher has been following Koshlyakov’s career for more than ten years. In 2005, he first presented Koshlyakov’s work to Italian viewers at the MACRO in Rome, and in 2016 he curated the show Elisions at the Museum of Russian Impressionism.
One of the oldest universities in Europe, Ca’ Foscari promotes Russian culture and art. It has an excellent exhibition space that has hosted exhibitions by the stars of international art.
A monograph on Koshlyakov and his work, edited by the Museum of Russian Impression and Silvana Editoriale, will be published on the occasion of the show’s opening.
The project is a collaboration with Ca’ Foscari University’s Centro Studi sulle Arti della Russia (CSAR). Silvia Burini and Giuseppe Barbieri will serve as the project’s research consultants.
Museum of Russian Impressionism
Museum of Russian Impressionism has been opened for the visitors in May of 2016. It issituated in the historic complex of manufacturing buildings dated of the end of the XIX century. The museum considers his mission as a popularisation of Russian art in general and its impressionistic component in particular, not only in Russia but also abroad.
More than a thousand square meters of exhibition space, multimedia room, educational interactional zone, workshop studio – the new museum is a cultural space bringing an exhibition work and scientific, publishing and educational activities together. 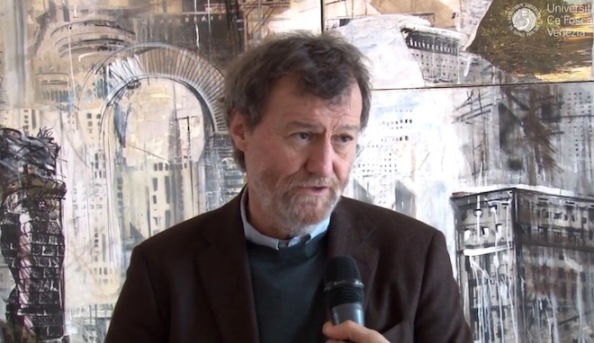 It is a wide review curated by Danilo Eccher of the artist who is being regarded as one of the most respected and interesting voices of contemporary Russian art, and who comes back to the Venice Biennale where his work was displayed in 2003. Koshlyakov, who lives between Paris and Moscow, has been exhibited in many prestigious venues: in Italy at the MACRO, in France at the Centre Pompidou in Paris and, naturally, in most of the major public Russian museums such as the State Tretyakov Gallery in Moscow or the State Russian Museum in St Petersburg. He has also exhibited his works in the Louvre in Paris, the Guggenheim Museums in New York and Bilbao, the Pushkin State Museum of Fine Arts in Moscow and the John F. Kennedy Center for the Performing Arts in Washington DC. The Venice show features works which allude to the Italian city and its famous Palazzi, but the architecture of palaces and their interiors, whether Muscovite or Venetian, will be the exhibition’s backbone. Koshlyakov’s large paintings resemble, rather, stage scenery, as if we were in the audience at a play entitled The Seven Sisters of Moscow, in which the starring roles were played by Moscow’s famous Stalin-era skyscrapers, exemplars of socialist classicism. In a sense, we can talk about “gigantism” in Koshlyakov’s work: a paradoxical gigantism which employs a variety of recycled media, including cardboard, packing tape, plastic, and metal. His magnificent “panoramas” hence generate an impressive space that captivates the eyes and imaginations of viewers.

INTERVIEW WITH THE CURATOR Danilo Eccher