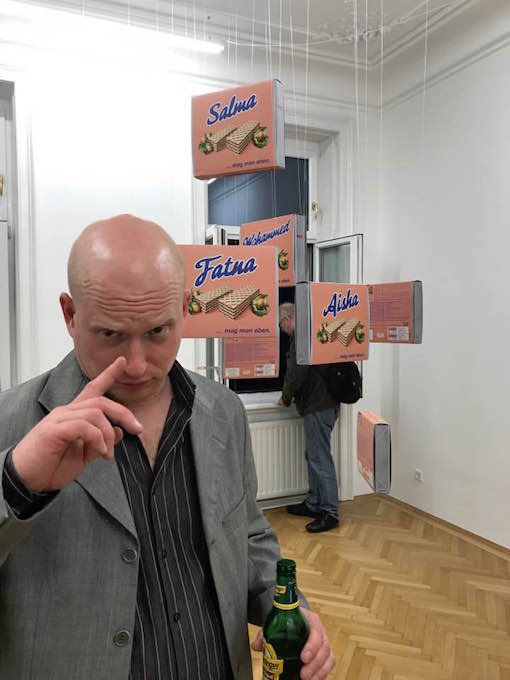 his first solo exhibition in Austria.

Riiko Sakkinen (*1976, Helsinki, Finland) composes drawings, paintings, murals, slideshows, installations and interventions that comment on consumer culture, from fast-food to prostitution, from hypermarkets to drug cartels. In his Vienna show, the artist puts the finger on the immobility of Western European societies, particularly in the wake of the events of recent years, which saw Europe grapple with topics such as immigration, integration and identity.

RIIKO SAKKINEN is artist and dissident.
Riiko Sakkinen was born 1976 in Helsinki. After graduating from the Finnish Academy of Fine Arts, in 2002, he moved to Spain, where he is headquartered in Pepino, a tiny village in the province of Toledo.
Riiko Sakkinen is the founder of Turbo Realism, a 21st century art movement which depicts the globalized capitalism with a mocking verisimilitude. He does drawings, paintings, murals, objects, slideshows, installations and interventions about the consumer culture from fast-food to prostitution and from hypermarkets to drug cartels. He believes, according to Pablo Picasso’s words, that the art is not made to decorate rooms. It is an offensive weapon in the defense against the enemy.
Riiko Sakkinen’s works have been exhibited widely around the world in galleries, museums and biennials, such as Museum of Modern Art, New York; Camden Arts Centre, London; Musac Museum of Contemporary Art, Leon, Spain; Kiasma Museum of Contemporary Art, Helsinki and Beijing 798 Biennale. His works are included in the permanent collections of several museums including The Museum of Modern Art, New York; Helsinki Art Museum HAM, Kiasma Museum of Contemporary Art, Helsinki, Serlachius Museums, Mänttä, and Bury Art Museum.