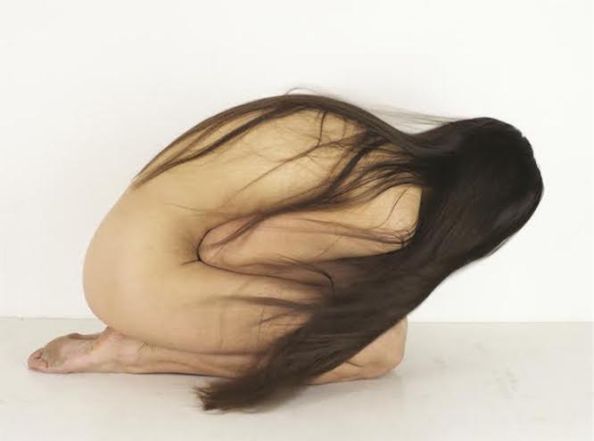 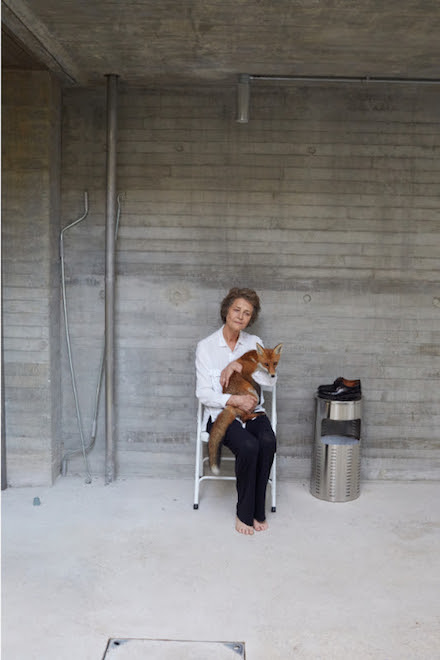 Juergen Teller and his subjects seem to play out together the thrilling, obsessive, nervous-making drama of the wrestling of photographic access. They explore intimacies that are often startling in the extreme – but oddly comforting, too, in their sense of a shared, bodily vulnerability. Teller seems to bring to the intrusiveness and voyeurism of photography a naivete that is disarming, yet fully self- aware. This eager and almost infantile need to look and know and capture comes with a directness that also allows his subjects to feel the photographer’s inevitable nervousness in bringing to them his compulsion to photograph. This transforms the inequality of the photographic exchange into a human encounter, mingling excitement and apprehension, turning the contingencies of fashion into the rigours and difficulty of art. This drama of access – at once ardent and impudent, exquisite and gross, excessive and refined – is played out most brilliantly in Teller’s work with the British actress, Charlotte Rampling.
Mixed in with models and designers and actors, each legendary in his or her own way (or made legendary by Teller’s camera), are family and friends, together with figures that inspire or intimidate, and landscapes and architectures that warm or chill the heart. (quot. Aveek Sen)

”W.H.A.T. Y.M.G.?”
„Where Have All the Young Men Gone?“ is a line taken from a song by folk singer legend Pete Seeger. This rhetorical question is used by artist Lucas Zallmann in the form of an acronym as the title for his current exhibition.
He uses the anti-war song from the 1950s as a point of departure to broach the subject of the evolution of gender roles. Zallmann, born in Vienna in 1979, understands the loss of youth, reminiscent in the song, above all as a loss of a natural, uninhibited relation to our own body and gender.
One feels somewhat reminded of the topos of the eviction from paradise. Zallmann ponders a state avant la lettre, prior to the dawn of the age of self-reflection: before the menacing thorn of doubt dug itself deeply into the flesh – and conscience – of mankind.
His illusory, acrylic cloud paintings invite a view into a blue summer sky and evoke – to say it with Milan Kundera – the unbearable lightness of being.
They are too beautiful to be true.

”W.H.A.T. Y.M.G.?”
Lucas Zallmann is a young man. But with the title of his latest exhibition, he impertinently poses the question, “Where Have All The Young Men Gone?”

This forces us to consider Zallmann as wilfully, voluntarily, inhabiting an ambiguous position. Is Zallmann somehow no longer a ‘Young Man’ when he presents in the omniscient role of ‘The Artist’? Or is ‘he’ absent from what he is presenting to us here? Is ‘he’ instead a linguistically neutral ‘They’?, or a ‘One’? Or perhaps, it is the ‘Young’ or the ‘Man’ aspects of himself which are losing ground, slipping away, disappearing?
When I hear this title, it evokes the lyrics of an old folk song, but one that I just quite place. To me, the line is a is a wistful lament from the mists of the pre-internet past, both ancient and Modern, a world in which young men uniformly went off to War. From the slave armies of Spartacus to the conscripts at Dunkirk, it was simply a social given that the young men went away. And after they left, their Fate was uncertain. There was no Facetime, no Facebook, they either fell dead in the wars which they were sent to fight, or they made it through, but only to forge new lives with those they found along the way, and their faces simply faded from their first sweethearts’ memories. They could so easily disappear, slip away, become lost in the World. If by Fortune they did manage to return Home, they were, naturally, no longer young; only old men came back, and the young men were gone, forever.
Today, male youth are required to exist as global consumers, not collectively condemned to be carnage in either Colosseum or battle field. They are not expected to suddenly be ‘gone’ from our society at some automatic cut-off point. Instead, they meander the streets of every city. We see them on their Supreme skateboards, ironic logo baseball caps, floppy hair, recreational tattoos, commitment issues and ghosting habits. Rather than their Home Town, however, they live “virtually” online, streaming continuous images across-the-universe through a 5G wifi hookup. They still grow stubble and don’t want acne, but are they really what they appear to be? Without the clear social distinction of the masculine role being that of fighting and dying for a flag, are they really young men? Without that dark, defining pressure, what distinguishes them at all?
Perhaps the difference is in fact, becoming more and more slight. In this show, utilising a variety of media, Zallmann investigates his preoccupation with the strange hormonal consequences of today’s synthetic food chain upon the ‘young men’ of our time. That they (and He?) may be dissolving from the inside out due to the cyclical run-on effects of the excess oestrogenation of the water, the meat, the milk, the air, even, all the factors of a post-post-modern life that messes with personal testosterone levels. Explains Zallmann: “I think hormones are so interesting because they are what makes a woman a Woman, and a man a Man. If you look at brain-scans of thought patterns, these are different between the sexes. Intersex people are also different again; a man who wants to be a woman will have a ‘feminine’ centre. But with all of these differences, its surprising how similar as molecules oestrogen and testosterone look.”
The standout icon of the show is Zallmann’s Smiley Face, remixed with a slashed mouth and slit eyes made from peeled and replaced paint strips. Like a caveman scrawl with a charcoal rod, the graffiti of a child with a stick in wet concrete, this three-lined form is a perfect summary of the digital era. ‘Digital’, after all, simply means – a finger can do it. This is a time unlike any other before it, in which any identity can hide behind another face, quite majestically termed ‘the avatar’ online. Its interesting to note that a smiley face is absolutely gender-neutral. Its expresses its simple emotional state without needing to choose a binary sexuality. They are androgynous, like the fish also featured in the show, an homage to the the minnows which lose their sexual distinction from living in waters polluted by human industry. By simply breathing the trace particles present in their aqueous ‘air’ the physiques of these finned creatures become a form which is ‘naturally’ transgender. Its an inescapable cycle that comes back to bite us humans in the ass; with each mouthful of polluted fish-flesh consumed, we start it all again. A recent study found that 85,000 of the 125,000 new chemicals developed since the Industrial Revolution are found in the bodies of fish. “Among the undesirable effects of these contaminants can have on us is lower intelligence, lower sperm count, and more symptoms of depression, anxiety and stress.*” (*U.S. EPA Chemical Substance Inventory, quoted in J.Balcolme, ‘What a Fish Knows,’ 2016)
The anxious young men of today are already a few generations away from those born from 1960s wombs manipulated into anti-fertility by Anti-Babypillen chemical contraceptives. These are their grandmothers. Their Fathers are the shadow-men who engineered the power of the Corporate ‘THEY’s, those without moral or scruple who maintain the hegemony of financial systems by seamlessly both creating and supplying the addictive nutritional, medical and recreational whims wants and needs of global society. The natural is un-natural, unheimlich, became we have made it so. Mother Nature is Caitlyn Jenner, now. No matter where on the Earth one lives, inadvertently absorbing detrimental chemicals from environmental factors is not an option, its a given. You’d have to eject yourself from the planet to escape its water, sugar, alcohol, coffee, soy sauce and underarm deodorant, even the rain that falls from the very clouds above.

Adrian Buschmann makes statements such as: ‘Just as I paint the larger ones [sic paintings] for people who look like those in them, I paint the small ones for their big siblings.’, thus legitimising the dedication of paintings to other paintings.
With the same sovereignty he slips into the opus of passed away fellows in which he detects vicinage to his own works. Evoking Deleuze’s enculage , Buschmann produces in a manner of speaking their posthum bastards. Perhaps this resonates incidentally with the title of the exhibition, which sounds cheerful in Italian (macchiato), but whose meaning, translated to German or English (maculose), reveals a more sinister and awkward tone. To Buschmann, works of other artists resemble a holiday from himself. By dislocating particular lines from the large paintings onto the smaller ones as another method of distancing, and with aesthetic considerations alone as criteria, such decontextualisation shifts parts of his oeuvre to the genre of abstraction. All these facets of separation and estrangement beget a space with diminished barriers to the onlooker’s own interpretations.
This is further being supported by the disclaimed authorship inherent in the artist’s approach. Significant for this exhibition is Buschmann’s revisit of Leon Chwistek’s works, an endeavour the artist was already occupied with in 2015. Given his change of residence, from the Ligurian Sea back to the city, Buschmann sensed that there were contemplations that still called for completion, especially in the now “new” environment. Chwistek’s drawings depict socialites at the early 20th century, a privileged circle on the quest for pleasure above all. The gestures in Chistwick’s illustrations imply refinement. Buschmann transports them via hyper-minimalist pictorial cover versions into the present. Contemporary insignia, such as fashion and devices, are missing completely, as essentials never have seemed to have changed anyway. The artist’s attention is therefore more geared towards affects and forms than this kind of formalities, which further assures the even transference of the pictures he occupies to the current. Lines bear such a weight in Buschmann’s body of work, that references can be frequently found in the titles of the paintings, sometimes as puns: i.e. the painting titled “SS2018”, in the world of fashion commonly used to abbreviate Spring/Summer, but used here to hint at the silhouette of the figures depicted in the painting.
Gabriele Senn Gallery is looking forward to Adrian Buschmanns second solo show. 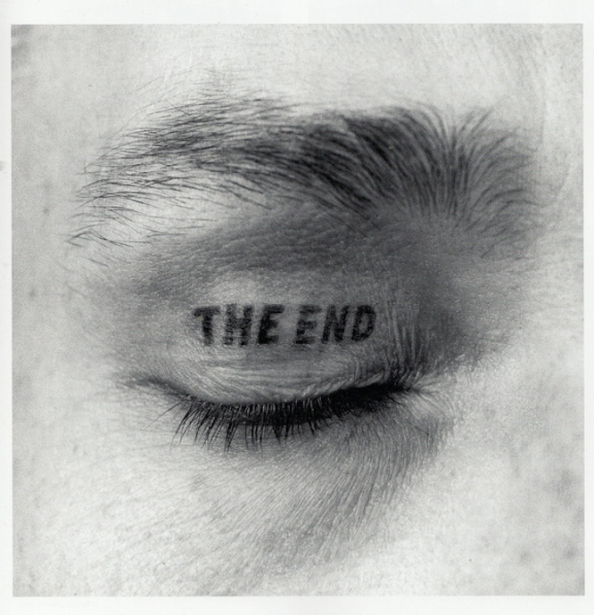