30 JANUARY – 24 FEBRUARY 2018
Painting is a magical art, it is the fire set alight by the final rays in the windows of a rich dwelling as in those of a humble hovel, it is the long mark, the humid [damp] mark, the fluent and still mark etched on the hot sand by a dying wave…

Following the success of Reading de Chirico at Tornabuoni Art London – the first exhibition ever to present the artist’s paintings alongside his writings – Tornabuoni brings this unprecedented show their Paris gallery for one month only.

The paintings of Giorgio de Chirico are among the most iconic and influential of Italian 20th-century art. He was a forerunner of the Surrealist movement and the Scuola Metafisica. However, few know about the artist’s prolific literary legacy. This exhibition — eight years after de Chirico’s first retrospective in France at the Centre Pompidou — will show over 25 works spanning the artist’s entire career, alongside original manuscripts that offer unique insight into the pictorial world of Giorgio de Chirico.

This exhibition includes de Chirico’s art criticism, poems, prose and love letters, enabling visitors to find a new reading of de Chirico’s famous works through his own words. The show also sheds light on the artist’s unusual artistic career, which began with the more radical and much admired metaphysical period and evolved into a more “baroque”, painterly style.

Following the Reading de Chirico exhibition at Tornabuoni Art London, which was curated by Katherine Robinson, member of the scientific committee of the Giorgio and Isa de Chirico Foundation in Rome, the Paris show also represents the different themes explored by the artist throughout his career: Italian Piazzas, Horses and Horsemen, Portraits, Still Lifes, Mythologies and Mannequins.

Highlights of the exhibition include the early metaphysical painting La grande tour (The great tower) from 1915 and a Nude from 1930, which Tornabuoni is proud to announce has recently been identified as a portrait of de Chirico’s lover Cornelia. These key works will be exhibited alongside writings in de Chirico’s own hand, including excerpts from Hebdomeros, a novel written by the artist in 1929 that reveals much of his creative universe.

Reading de Chirico at Tornabuoni Art Paris is accompanied by an original scholarly catalogue, edited by Katherine Robinson with texts by Dr. Gavin Parkinson, Senior Lecturer in 20th-century European Art at the Courtauld Institute of Art, London, and an expert in Surrealism. This publication includes a selection of the artist’s writings (1919-1945). 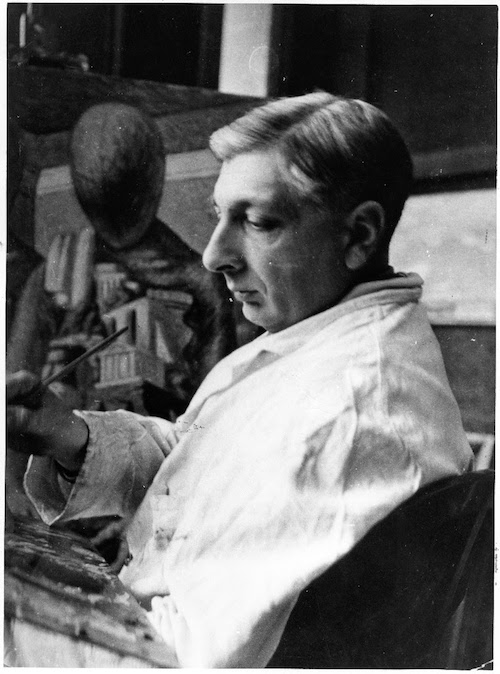 Born in Volos, Greece, in 1888 of Italian parents, Giorgio de Chirico was encouraged to pursue drawing and painting from an early age. After studying at the Polytechnic school of Athens, de Chirico attended the Academy of Fine Arts in Munich from 1906 to 1909. He painted his first metaphysical work The Enigma of an Autumn Afternoon in Florence in 1910. He exhibited for the first time in Paris in 1912 and met poet Guillaume Apollinaire and Paul Guillaume, his first art dealer. In Ferrara, during the First World War, he developed the Metaphysical Interior theme and met artists Carlo Carrà and Filippo de Pisis. His canvases proved popular with many Surrealist artists – their eerie silence and dream-like quality resonating with the artistic ambitions of the Surrealists.

In the early 1920s, de Chirico focused his interest on painting technique and the Old Masters in Rome. He wrote numerous articles for art publications such Valori Plastici.

De Chirico attracted criticism from the avant-garde art world as he adopted more a more traditional style and technique, painting mythological subjects and landscapes. He returned to Paris in 1925, where he developed themes such as the Archaeologists and the Gladiators. His change of style led the Surrealists to renounce him definitively.

ABOUT TORNABUONI ART
Founded in Florence in 1981 by Roberto Casamonti, in the street that gave the gallery its name, Tornabuoni opened other exhibition spaces in Crans-Montana in 1993, Milan in 1995, Forte Dei Marmi in 2004, Paris in 2009 and London in 2015.

Specialising in Post-War Italian art, the gallery presents the work of artists such as Fontana, Burri, Castellani, Bonalumi, Boetti, Scheggi and Manzoni. Tornabuoni Art also has a permanent collection of significant works by major modern Italian artists, such as de Chirico, Morandi, Balla and Severini, as well as international 20th-century avant-garde masters, such as Picasso, Mirò, Kandinsky, Hartung, Poliakoff, Dubuffet, Lam, Matta, Christo, Wesselmann, Warhol and Basquiat. Complementing its focus on post-war and 20th-century art, the Tornabuoni Art collection also features the work of young contemporary artists such as the Italian artist Francesca Pasquali and the Italy-based Armenian artist Mikayel Ohanjanyan, who, along with the Armenian pavilion, won the Golden Lion at the 2015 Venice Biennale.

The gallery also works closely with museums, artists’ estates and institutions, most recently with the Giorgio Cini Foundation in Venice on the exhibition ‘Alighiero Boetti: Minimum/Maximum’, timed to coincide with the opening of the Venice Biennale 2017. With Tornabuoni Art’s experience and knowledge of the work of the artists it represents, the gallery has also established itself as an advisor for both private and public collections.