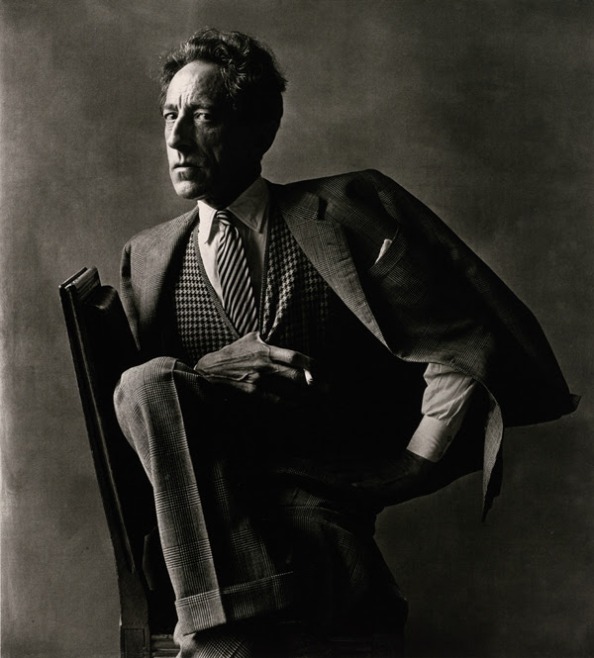 Galerie Thaddaeus Ropac is honoured to present its first exhibition of the iconic American photographer Irving Penn (1917-2009), The Flavour of France, from 19 October 2017 to 6 January 2018 in Paris. Titled after a photographic essay published by Irving Penn in 1960, in which he celebrates what André Gide called the “horror of the approximate” that characterises French charm, the exhibition focuses on three different bodies of work: Nudes, Small Trades and artist portraits. Dating from the period 1947–1950, each reflects in its own way the close relationship Irving Penn maintained with France throughout his life, by contact with artists, frequent visits and by their idealised redolence. The exhibition coincides with the Irving Penn centennial retrospective at Grand Palais in Paris running from 21 September 2017 to 29 January 2018, previously at the Metropolitan Museum of Art in New York. Since September 2017 Galerie Thaddaeus Ropac represents The Irving Penn Foundation in France in collaboration with Pace/MacGill Gallery, New York.

Portraits, Paris and New York, 1947-1950
Irving Penn gained international fame from his psychologically intense and elegantly composed portraits. Commissioned by Vogue’s art director and Penn’s mentor Alexander Liberman, the works strike by their graphic simplicity and immediate impact — qualities that both meet the requirements of the printed page. Penn’s portraits of artists result from demanding sessions, during which he would “find ways to melt personal defenses and encourage his sitters to emerge from their protective armor” as Maria Morris Hambourg, curator of the centennial exhibition at the Metropolitan Museum of Art, comments.
Penn coupled this psychoanalytic-like method with the use of a spare background to unveil the personality of the sitters and foreclose narrative readings of their pose. The lack of context confuses the viewer’s sense of scale and heightens awareness not just of the sitter’s body language and what it reveals, but also of what remains unseen, be it the cavernous presence of Père Couturier or the mysterious silhouette of Marlene Dietrich.
In 1947, Irving Penn began setting portraits in a small corner space made of two studio flats pushed together. To quote the photographer, “a very rich series of pictures resulted. This confinement surprisingly seemed to comfort people, soothing them. The walls were a surface to lean on or push against.” Some, like Marcel Duchamp, would play with the device; others would stick to the instructions.
Penn employed this narrative-resistant style until the end of his life, ultimately seeking for his pictures to be as “weighty and resolved” as paintings.

Nudes, New York, 1949-1950
While working at Vogue in the late 1940s, Irving Penn initiated the personal project of photographing the female body in a pioneering way. This would become “the major artistic experience of his life”, as he himself stated. Freed from commercial expectations, he started a series of sessions to photograph nudes in his own private studio at 480 Lexington Avenue. During hours-long sessions, Irving Penn would scrutinize the changing configurations of the female body within the viewfinder of his Rolleiflex camera.
Initially, Irving Penn photographed lean models in twisting poses. Stepping away from fashion standards he then photographed curvy women, who feature in most of the final printed images.
As Maria Morris Hambourg states: “The amount of erotic content in the photographs is very high, yet, like the sessions themselves, it is held in check by a controlled, aesthetic distance. His mental library was filled instead with the simplified contours and smooth surfaces of the nudes by Arp, Brancusi, Maillol, Moore, Picasso and Matisse that had graced European art magazines in the 1930s.”
The sculptural quality of the work, where the body often appears truncated, distorted and even abstracted, is reinforced by the photographer’s focus on the tactility of the image itself. While printing the nudes, Irving Penn used an experimental process to create ethereal images that blur fine detail and flatten the undulating curves into almost abstract planes of light and shadow. Now considered a key aspect of his artistic work, this series of nudes remained largely unseen and unpublished until 1980, when exhibited at Marlborough Gallery in New York.

Small Trades, Paris, 1950
In late July 1950, Irving Penn returns to Paris to photograph the couture collections for Vogue with the idea of starting a new series dedicated to tradesmen. Equally influenced by Eugène Atget’s portraits of tradesmen at the turn of the century and the socially engaged work of Walker Evans, he developed his own vision. Instead of the vernacular setting of the street he chose to isolate the subject in a studio Vogue rented for him in the rue de Vaugirard in Paris.
In 1991 he would recall: “A steady stream of workmen, street vendors, and fringe Parisians climbed the six flights to the studio, where they waited their turn to pose between pictures of couture and portrait sittings of the distinguished.”
The workers would pose with their tools in front of the camera in the neutral space of the studio, which provided a sense of timelessness to their portrait.
As Irving Penn notes in Moments Preserved (1960) “like everyone else who has recorded the look of tradesmen and workers, I was motivated by the fact that individuality and occupational pride seem on the wane.” He would later expand the series in London and New York, progressively establishing somewhat of a typology. The Small Trades series eventually became his largest body of work.
Considered today as one of the major achievements in modern photography, this series stands as a manifesto of Penn’s photographic methodology. As he said during a symposium on modern photography organized by Edward Steichen at MoMA in 1950: “The modern photographer…brings equal interest and devotion to the problem of photographing a queen, a chair, a fashion model, a soldier, a horse. He finds something of himself in everything, and something of everything in himself.” 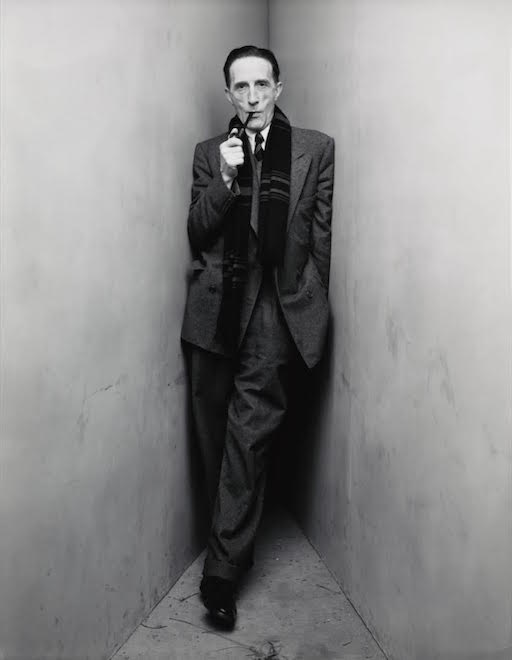 Born in 1917 in Plainfield, New Jersey to a Russian Jewish family, Penn attended the Philadelphia Museum School of Industrial Arts from 1934–38 and studied with Alexey Brodovitch in his Design Laboratory.
Irving Penn’s work initially had an ideal outlet on the pages of Vogue, where it was finely reproduced and widely disseminated. In 1943, the new art director at Vogue, Alexander Liberman, hired Penn as his associate to prepare layouts and suggest ideas for covers to the magazine’s photographers. Liberman, another Russian émigré who had worked in Paris, looked at Penn’s contact sheets from his recent travels and recognized “a mind, and an eye that knew what it wanted to see.”
After the Second World War, as Penn quickly developed a reputation for his striking style in still life and portraiture, Liberman sent him around the world on portrait and fashion assignments. These were formative experiences, which confirmed Penn’s preference for photographing in the controlled environment of a studio, where he could trim away anything that was not essential to his compositions and hone in on his subjects.
Penn’s travel for Vogue increased between 1964 and 1971, taking him to Japan, Crete, Spain, Dahomey, Nepal, Cameroon, New Guinea, and Morocco. On these trips Penn was increasingly free to focus on what truly interested him: making portraits of people in natural light.
In the early 1970s, Penn closed his Manhattan studio and immersed himself in platinum printing in the laboratory he constructed on the family farm on Long Island, NY. This led to three major series conceived for platinum: Cigarettes (1972, presented at The Museum of Modern Art in 1975), Street Material (1975–76, shown at The Metropolitan Museum of Art in 1977), and Archaeology (1979–80, exhibited at Marlborough Gallery in 1982). Like his earlier Nudes series, this work departed radically from the prevailing uses of photography. In 1984, he was honoured with a retrospective curated by John Szarkowski at The Museum of Modern Art, which toured internationally until 1989. After the retrospective, Penn resumed painting and drawing as a creative pursuit, even incorporating platinum printing into his practice. Penn’s creativity flourished during the last decades of his life. Determined to shape the body of work he left behind from such a prolific career, he also carefully structured and reduced his archives. In 2009, Penn died in New York, at the age of 92. During his lifetime, he established The Irving Penn Foundation.

Irving Penn is considered as one of the twentieth century’s great photographers, known for his arresting images and masterful printmaking. At a time when photography was primarily understood as a means of communication, he approached it with an artist’s eye and expanded the creative potential of the medium, both in his professional and personal work.