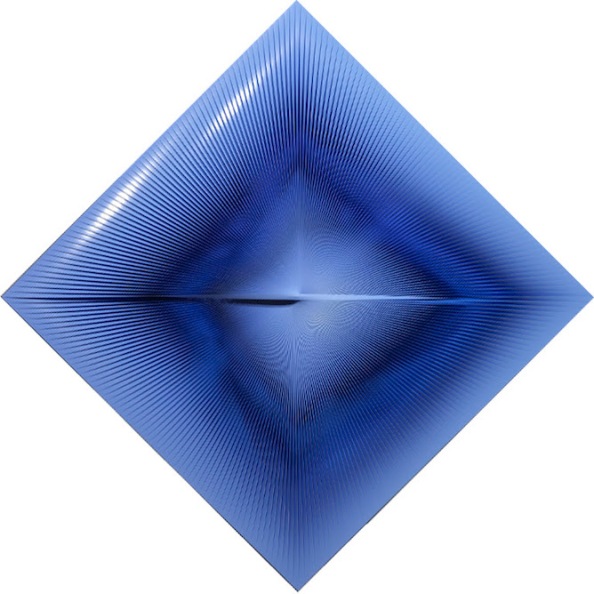 Tornabuoni Art London presents the work of Italian kinetic artist Alberto Biasi (b. 1937). Focused primarily on his iconic Rilievi Ottico-Dinamici (optical dynamic reliefs), the exhibition also features works from Biasi’s early period working with the Gruppo N and extends all the way to his more recent production.
Born in Padua in 1937, Alberto Biasi is one of the foremost of kinetic artists in Italy, as well as a co-founder of the Gruppo N, which included Ennio Chiggo, Toni Costa, Edoardo Landi and Alfredo Massironi. The optical-dynamic experiments that the group realised between its creation in 1959 and dissolution in 1967 led to Biasi being exhibited alongside Enrico Castellani and the Nove Tendencije movement in Zagreb.
Biasi’s inclusion in the groundbreaking exhibition in Zagreb established him as one of the leaders of the Arte Programmata (‘Programmed Art’) movement that advocated the creation of mathematical rules to predetermine the creation of the artworks, while offering possibilities of variations in the artwork’s colour, size and shape. His method of Arte Programmata and its variations can be seen in the serialised installation at Tornabuoni Art.
Opening the exhibition are historic works, including one example of Biasi’s first series entitled Trame (wefts), which was composed of cotton gauze, metal wire and perforated cardboard overlaid to create wefts through which light filters in a constellation-like effect that changes in relation to the viewer. Taking this relationship between the artwork and the spectator even further, Biasi started making his Oggetti Ottico-Dinamici (optical dynamic objects) in the early 1960s – thin strips of PVC radiating from a central point and twisting equidistantly towards a geometric wooden frame. As the suspended object oscillates and the spectator moves around it, the immobile strips become animated with morphing geometric shapes. Thus the artist elaborated the concept he called ‘virtual kineticism’, where the movement is an optical illusion created in the viewer’s mind and which Biasi explored further with the Rilievi Ottico-Dinamici, that constitute the core of the current exhibition: in these works the PVC strips are attached over a painted and later even patterned and printed surface to create ever-more intriguing shapes.
As well as 12 exhibitions with the Gruppo N, including The Responsive Eye at the MoMA in New York and numerous solo shows, Biasi’s work has been presented at the Venice Biennale, the Sao Paulo Art Biennial, the Rome Quadriennale and most recently in the AZIMUT/H Continuità e nuovo exhibition at the Peggy Guggenheim Collection in 2014.
TORNABUONI
Founded in Florence in 1981 by Roberto Casamonti, in the street that gave the gallery its name, Tornabuoni opened other exhibition spaces in Crans-Montana in 1993, Milan in 1995, Forte Dei Marmi in 2004, Paris in 2009 and London in 2015. Specialising in Post-War Italian art, the gallery presents the work of artists such as Fontana, Burri, Castellani, Bonalumi, Boetti, Scheggi and Manzoni. Tornabuoni also has a permanent collection of significant works by major Italian artists of the Novecento, such as de Chirico, Morandi, Balla and Severini, as well as International 20th century avant-garde masters, such as Picasso, Mirò, Kandinsky, Hartung, Poliakoff, Dubuffet, Lam, Matta, Christo, Wesselmann, Warhol and Basquiat. Complementing its focus on Italian art, the Tornabuoni collection also features the work of young contemporary artists such as the Italian artist Francesca Pasquali and the Italy-based Armenian artist Mikayel Ohanjanyan, who won the Golden Lion at the 2015 Venice Biennale and whose work is currently on show at Yorkshire Sculpture Park in 2017.
Tornabuoni participates in major international art fairs such as the FIAC in Paris, TEFAF in Maastricht, Art Basel, Art Basel Miami Beach, Art Basel Hong Kong, Artefiera in Bologna, Miart in Milan, Frieze Masters in London, Artgeneve in Geneva and Artmonte-carlo in Monaco.
The gallery also works closely with museums and institutions. With its experience and knowledge of the work of the artists it represents, the gallery has also established itself as an advisor for both private and public collections.
http://www.tornabuoniart.com/tornabuoni-art-london.html