Jonny Niesche Lower than this we fin a demand for love

SPLITTING IMAGE. Jonny Niesche
Niesche’s new works for SPLITTING IMAGE are based on experiences and events. They loose their purpose if the viewer, the artwork and the space do not come together. Only in conjunction they form a performative and aesthetic experience – physiological, subjective and infinitely renewing the gallery space. They are always in a state of becoming or being in-between. The Starting point for the exhibition was Niesche’s sojourn in Vienna, or better the city fabric with its colours and styles: empirical opulence and sometimes kitsch, wonderful and sometimes hideous color combinations. Above all else he noticed an almost ubiquitous golden embellishment on public sculptures. This obsession with gold is reflected in the centerpiece of the exhibition: ‘Mutual Vibration (Strauss)’, referencing Johann Strauss’ famous sculpture at Stadtpark – a golden painting spinning as if waltzing. Jonny Niesche’s paintings harness what French philosopher Michel Serres refers to as the primacy of our senses – the optical pleasure of their elusive surfaces have a direct and primal effect, hard and soft, real and imagined. 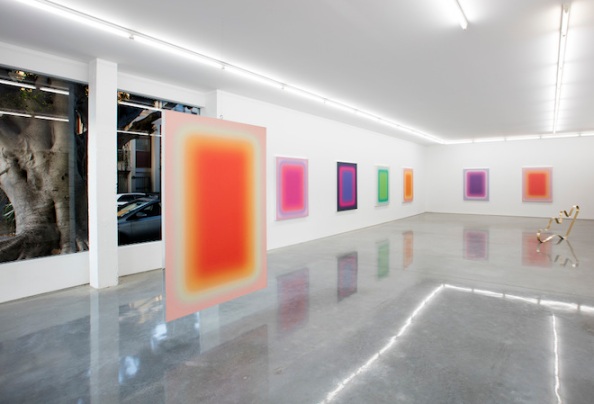 Jonny Niesche (*1972 in Sydney) completed his Masters of Fine arts at Sydney College of the Arts with Mikala Dwyer and at the Academy of Fine Arts Vienna with Heimo Zobernig. Major group exhibitions include ‘Superposition of three types’ at Artspace, Sydney, 2017; ‘Shut up and Paint’ at the National Gallery of Victoria (NGV), Melbourne, 2016 and Painting. ‘More Painting’ at the Australian Centre for Contemporary Art (ACCA), Melbourne, 2016. In 2014 Jonny Niesche received the prestigious Fauvette Loureiro Memorial Artists Travel Scholarship from Sydney University.

Lives and works in Sydney