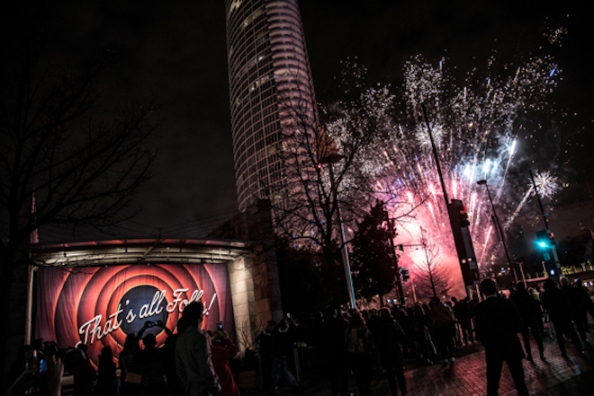 Los Angeles-based Piero Golia (b.1974, Italy) kicks off three solo exhibitions. Golia counts among the most idiosyncratic contemporary conceptual artists, consistently challenging dominant systems and conditions—not only in art. In 2005 he co-founded the Mountain School of Arts in Los Angeles, where students can learn and take classes without having to pay any fees. In 2013 he set up Chalet Hollywood—a form of club with loans and works by artist friends—to enable an experience of art through conversations, shared meals and exchanges, etc., in one place. Now in the Kunsthaus Baselland Golia skilfully deals with the expectations placed upon artists and how they appear in public, but equally considers their ability to generate a social fabric. Golia calls his work The Painter; it consists of a huge robot that moves along lengthy tracks which—in response to visitors entering—begins to act somewhat strangely and, specifically, to paint. “In my opinion” says Golia, “we should seek open models in which the viewer has the possibility of forming their own narrative.” This is exactly what is possible by interacting with the painting robot. (A catalogue with an interview between Piero Golia and Jonathan Monk and a text by Ines Goldbach accompanies the exhibition. Publisher: NERO, ISBN: 978-88-8056-003-6)

New works by artist Markus Amm (b.1967, Germany) who lives in Geneva are shown in the spaces of the Kunsthaus upper storey, creating a clear connection to Golia’s Painter. His fascinating and sometimes enigmatic abstract painting allows viewers a distinct, unusual visual experience. Amm pours thinned oil paint onto the surface of gesso-coated boards which he has painstakingly prepared. The colours flow together in varying formations, partly controlled and partly left to chance. The result is painting which seems to develop bit by bit before your eyes almost like a polaroid image, and which, through its astonishing effect of depth, creates its own spaces as well as a new spatial structure in combination with the surrounding architecture. (A catalogue with an interview between Markus Amm and Ines Goldbach and a text by Jan Verwoert accompanies the exhibition. Publisher: Karma, New York, ISBN: 978-1-942607-72-4)

Finally, with the exhibition from Itziar Okariz (b.1965, Spain), which occupies the whole lower floor of the Kunsthaus, the first survey of the extensive work by the Basque performance artist is possible. The discovery of how identity is constructed is key to her practice. In recent works Okariz focusses on dealing with language and the possibility of shifts of meaning through language. In fragments, repetitions, elisions and new combinations words and sentences are tested to see if new correlations of meaning can be created. The exhibition was made in cooperation with partner institutions in Madrid (CA2M. Centro de Arte Dos de Mayo) and San Sebastián (Tabakalera. Centro Internacional de Cultura Contemporánea). A comprehensive catalogue of Okariz’ work will be produced in collaboration with these venues.