Organization: Culture project agency INDIE with the support of Ministry of Culture of the Republic of Latvia and ABLV Charitable Foundation
What Can Go Wrong
The title What Can Go Wrong can be interpreted in various ways—surprise, question, or history. This ambiguity highlights an issue that concerns contemporary projects: how do we talk about our time? In what language? Miķelis Fišers chooses the language of the renegade, a marginal discourse full of unscientific bodies and substances – Grays, Egregores, Secret Governments. Of all bodies of knowledge, he chooses knowledge without status. As Barthes writes, science (knowledge) is not defined by content or morality today; science is what is taught. Contemporary art has its own scientificity, which helps differentiate it from something else. In terms of Fišers’ art, it generally doesn’t help. Fišers is convinced that life is squandered and uses esoteric master signifiers to show it.

The contemporary artist chooses esoteric deviation. What has led to this acratic (a – to be against; Κράτος – power) milestone, to this “’Enlightenment’s polemical Other’ with its ‘magic,’ ‘occult philosophy,’ ‘the irrational,’ or even simply ‘stupidity’” (Hanegraaff), to which the Latvian Pavilion also contributes?
At the bottom of it all (that everything needs to change), Miķelis Fišers’ art reminds us of Vassily Kandinsky’s confidence, when he wrote about “Letzte Stunde der geistigen Wendung” a hundred years ago. Kandinsky abandoned narrative and created abstraction, which, in his view, reflected the transition from old materialism to new spirituality. Fišers, by contemplating the new age, offers horrific figurative dystopias and in his academic years (the 90ies) already knew that his work would be “literature” rather than “formal art.” The comparison is urged by the fact that such different works (Viva Arte Viva) were incurred from a similar theosophical basis about the transition to a new era, used by both artists—this transition has already stretched out over a century, so Kandinsky and Fišers are talking about the same thing!
One of the most interesting aspects of Fišers’ work is to detect, how an artist-made myth enters historical conditions. It is achieved with detailed drawings, accurate portrayals of psychological reactions and by using verbs in titles (i.e. by linking the language to the making of things): if reptilians treat sterilized Mermaids’ depression or aliens convert a concert into a public washroom, then the myth is not possible, because everyone is occupied with production and politics. Watching this hustle and bustle, there are countless “whys,” until finally you realize that you have experienced irresponsible policies, alienated functionalism, a raging ego and a complete unwillingness to live in such a world. Esoteric deviation is a way to talk about the political. 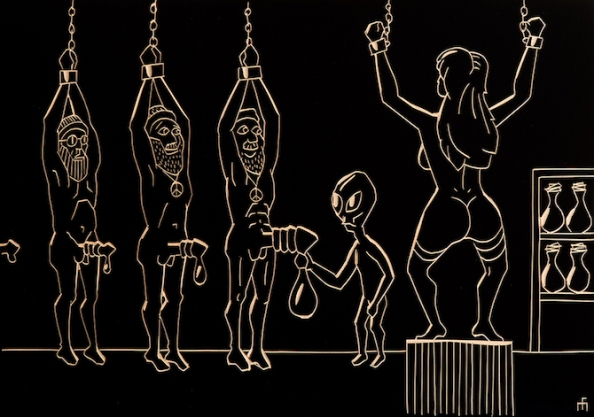 Grey Alien Semen-Milking Captured Pacifists at Area 51, USA.
2017, wood, polished paint, carving, 21 x 29,5 cm.
Fišers’ art is the ideal opposite to the status quo of contemporary art, as defined by artist Paul Chan: “Objective forces manifest in art today as subjective acts without an actual subjectivity, to express the power of inhumanity to define what is most human.” Fišers purposefully uses the power of the art itself—it’s being different from politics, philosophy, religion, science and esotericism, but trying to be in a conditional spatial point where the individual details of constructed fields lose their distinctions through their sharp edges. Striving to define its historical difference from art that was created before it, contemporary art has become careless in relation to the rest of the world. It’s starting to liken to everything else. Miķelis Fišers has taken this into consideration. He relies on and uses the distinctiveness of art in the traditional manner—intuitively creating images that express the essence, though to be fair, not without conceptual stylization.
By presenting the work of Miķelis Fišers (1970), the Latvian pavilion introduces an artist who, after graduating from the Latvian Academy of Art in 1995, gained recognition in the Baltic art scene rather scandalously: his series of paintings, Sex’n’spaceships, was removed from the exhibition Misfits: 6th Triennial of Young Baltic Art held in Vilnius, in 1995; in his installation God Is. Dogs Cannot Read (1995), Fišers uses a famous piece of taxidermy – a two-headed dog created by V. Demikhov, a physician and pioneer in organ transplantation (Demikhov added the front half of a puppy to an adult dog to merge bloodstreams, lungs and heart). Twenty years later, Fišers was awarded the highest prize in Latvian art, the 2015 Purvītis Prize for his solo exhibition Disgrace (2014), thereby demonstrating that his presence in contemporary art is relevant. 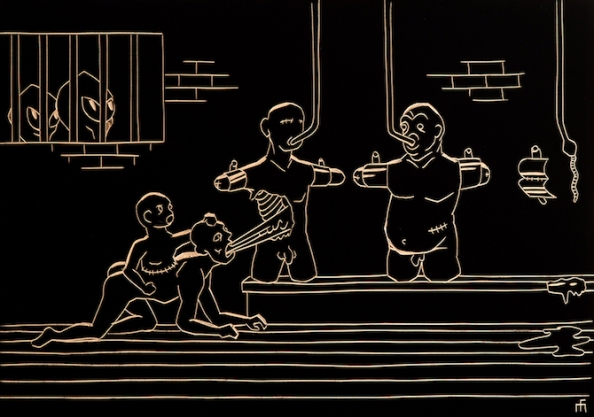 Extraterrestrials Monitor Humanitarian Crisis In the Oligarch Organ Warehouse. 2017,
wood, polished paint, carving, 21 x 29,5 cm.
The catalogue of the Latvian Pavilion features the exposition What Can Go Wrong with wood-carvings, painting and light and sound installation by Miķelis Fišers. It presents essays about esoteric narratives in Latvian and Estonian contemporary art by Inga Šteimane and Margus Tamm, and an essay devoted to Miķelis Fišers’ attempt to create the right situation of consciousness in his viewers’ minds by Ilmārs Šlāpins.
Inga Šteimane,
curator of the Latvian pavilion
https://www.fisers.lv/en/venice
https://www.facebook.com/fisers/