Fahrelnissa Zeid Untitled c.1950s Oil paint on canvas Tate. Presented by Raad Zeid Al-Hussein 2015
Tate Modern
UK’s first retrospective of FAHRELNISSA ZEID
b. 1901, Istanbul, d. 1991, Amman
re-appraising her work in an international context. Zeid was a pioneering artist best known for her large-scale colourful canvases – some over 5 metres wide – fusing European approaches to abstract art with Byzantine, Islamic and Persian influences.
This major exhibition will bring together paintings, drawings and sculptures spanning over 40 years – from expressionist works made in Istanbul in the early 1940s, to immersive abstract canvases exhibited in London, Paris and New York in the 1950s and 1960s, finishing with her return to portraiture later in life. Celebrating her extraordinary career, Tate Modern will reveal Zeid as an important figure in the international story of abstract art.
Zeid was one of the first women to receive formal training as an artist in Istanbul, continuing her studies in Paris in the late 1920s. The show will reveal her breakthrough moment in the early 1940s, when she championed experimental approaches to painting and exhibited with the avant-garde d Group in Turkey. The exhibition will look at how Zeid’s work from this period, such as the tapestry-like Third-class Passengers 1943, demonstrate her affinities with and divergence from international art movements, blending European painting traditions with Oriental themes. Several works from her first solo exhibitions, held in her own apartment in Istanbul in the mid-1940s, will be reunited, including Three Ways of Living (War) 1943 and Three Moments in a Day and a Life 1944. 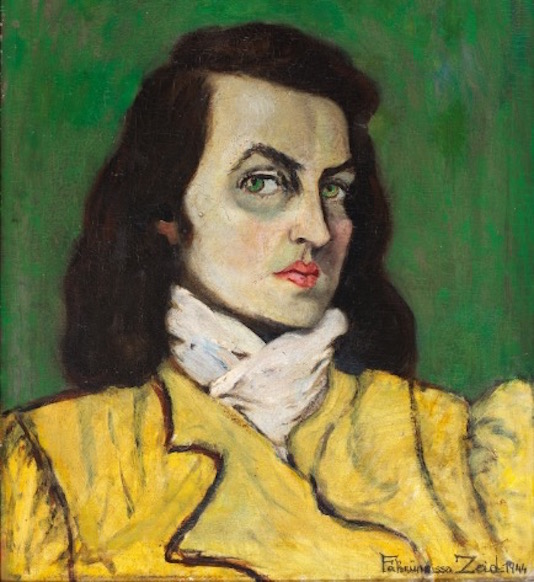 In 1945 Zeid and her husband, Prince Zeid El-Hussein of the Hashemite royal family, moved to the UK where he had been posted as Iraqi Ambassador. Splitting her time between London and Paris, Zeid’s exhibitions were well received by critics and artists alike, cementing her position as one of the great female artists working at the time. Two works from this period signal her turning point from figuration to abstraction: Fight against Abstraction 1947, which shows the confident use of strong black lines that became a motif throughout her career, and Resolved Problems 1948, with its vibrant colours and patterns that looked towards op and kinetic art. Key pieces from her 1954 show at the ICA in London will also feature, such as My Hell 1951, The Octopus of Triton 1953 and Sargasso Sea 1953, representing the artist at the height of her career as well as the captivating East-West dialogue in her work.
When the Hashemite royal family were assassinated in a military coup in Iraq in 1958, Zeid and her husband were forced to vacate the embassy – and her studio – in London. They found a modest flat and for the first time in her life, Zeid had to learn to cook. Although she had previously painted on stones, time spent in the kitchen inspired her to do the same on turkey and chicken bones, which she later cast in polyester resin panels evocative of stained glass windows – a selection of which will feature in the exhibition. In response to the coup, and perhaps in recognition of her own mortality, Zeid also made a return to figurative painting. For the last 20 years of her career she painted portraits of her friends and family with exaggerated features that recall the anti-naturalistic character of Byzantine art. The exhibition will culminate with several of these imposing portraits, including Charles Estienne c.1964.
Zeid spent the last years of her life in Amman, Jordan, where she transformed her home into an informal art school and surrounded herself with a cosmopolitan group of female students. Zeid died in 1991, aged 89, having exhibited across Europe, the USA and the Middle East. She left behind a remarkable visual legacy of her extraordinary life as well as a significant contribution to the global history of modernism.

Fahrelnissa Zeid is curated at Tate Modern by Kerryn Greenberg, Curator, International Art and Vassilis Oikonomopoulos, Assistant Curator, Collections International Art. The exhibition will be accompanied by a fully illustrated catalogue from Tate Publishing and a programme of talks and events in the gallery. The exhibition will travel to Deutsche Bank KunstHalle in Berlin in November 2017.
http://www.tate.org.uk/whats-on/tate-modern/exhibition/fahrelnissa-zeid
TATE MODERN
FAHRELNISSA ZEID
TALK
CURATOR’S TOUR:
FAHRELNISSA ZEID WITH VASSILIS OIKONOMOPOULOS
26 JUNE 2017 | 18.30–20 pm
Exhibition: 13 June – 8 October 2017
Bankside London SE1 9TG
http://www.tate.org.uk/
TATE MODERN
FAHRELNISSA ZEID
PRIVATE VIEW
Members Private View: Fahrelnissa Zeid
15 Jun 2017
Free for Members with the London Private View Pass only
Exhibition: 13 June – 8 October 2017
Bankside London SE1 9TG
http://www.tate.org.uk/
TATE MODERN
FAHRELNISSA ZEID
TALK
SARAH WILSON AND VENETIA PORTER ON ZEID’S ABSTRACTION
4 JULY 2017 | 18.30–20 pm
Exhibition: 13 June – 8 October 2017
Bankside London SE1 9TG
http://www.tate.org.uk/
TATE AND DEUTSCHE BANK
This exhibition is part of a partnership between Tate and Deutsche Bank spanning several years, which supports exhibitions at Tate Modern with a particular focus on art from Africa, Asia and the Middle East. The programme launched in September 2014 when Deutsche Bank KunstHalle presented Meschac Gaba: Museum of Contemporary African Art, a major acquisition for Tate’s collection, and then continued in 2016 with Bhupen Khakhar: You Can’t Please All as the second exhibition in this partnership. In 2017 Fahrelnissa Zeid will be on view at Tate Modern and subsequently at Deutsche Bank KunstHalle in Berlin.
Franziska Kunz, Global Head of Art, Deutsche Bank:
‘In the third collaboration between Tate and the Deutsche Bank KunstHalle we present Fahrelnissa Zeid’s first comprehensive retrospective. The artist combined traditional Islamic calligraphy with Western avant-garde ideas in a unique way. In the exhibitions that we have presented together we are especially interested in attracting a new audience to non-Western positions that have had a strong influence on the international art scene and so Deutsche Bank is proud to be sponsoring the exhibition in London.’