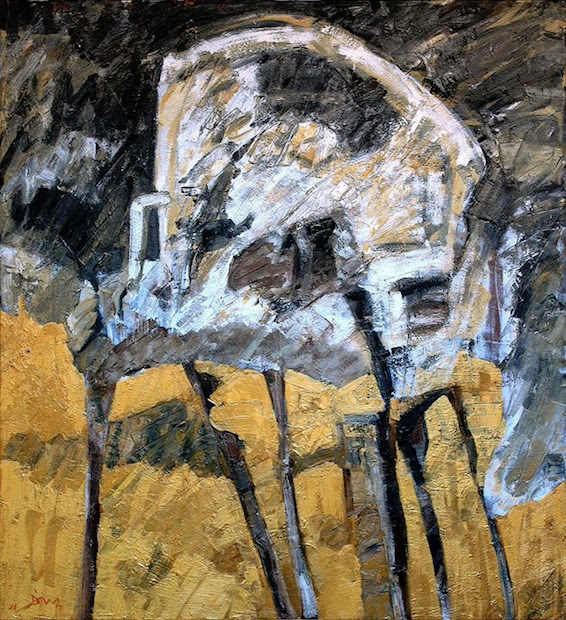 Gypsum is pleased to present “Remnants of Enchantment”, a two-person show of new drawings and oil paintings by Cairo-based artists Doa Aly and Islam Zaher, who is showing at the Gallery for the first time. Aly and Zaher share a formative experience as students of painting at a state-run fine art school in the nineties and the works presented in this show track an ongoing artistic exploration of the legacy of fine art traditions in their practice.
In 2007, Doa Aly started a series of sequential pencil drawings based on illustrations of the human skull anatomy, as they appear in the 25th edition of Henry Gray’s Anatomy of the Human Body. The series has organically evolved over the last ten years to reflect the artist’s interest in literature, performance, myth and ritual. Earlier sub-series of her drawings have featured depictions of dancer limbs, Victorian postmortem portraits and excerpts from Ovid’s Metamorphoses, a narrative poem that Aly has used as a major source in many of her performances and videos.
Primarily line-based, Aly pushes the fine art tradition of human figuration to its limit. She is adept at controlling pressure, motion and a generative friction between pencil and paper. Her terse, lace-like drawings of repeated patterns are intensely emotive but not expressionistic.
Islam Zaher’s loyalty to the essence of oil paint as an alive, tactile medium lies at the core of his art practice. Obsessed with the expressive potential of color and paint skin, his work seeks to translate cerebral processes into raw, psychologically charged images. Zaher’s sophisticated palette and his annihilation of form and contour stem out of his expert draftsmanship and innate understanding of the medium of painting.
For Zaher, “Remnants of Enchantment” started with an imprinted memory of a neglected sculpture studio to which he would escape as a student of painting – where ambition and longing advanced in existential cycles. The nihilistic mood of the space, of unfinished sculpture, dusty props and broken furniture, and particular characters that frequented the workshop form the basis for his oil paintings and charcoal drawings. Traces of futile labor and ludicrous desire are rendered in uneven brush strokes and careful layering. Zaher’s bodily motion in the process of painting wrestles to make a socio-psychological state of existence transpire through a medium that is as hard to contain as the ambition it attempts to express.

Doa Aly A Tress of Hair, 2008, single channel video projection, HD, 12 min. 43 sec.
Doa Aly was born in Cairo, Egypt in 1976. She attended the Faculty of Fine Arts in Cairo, earning a BFA in painting in 2001. Her work spanning video, drawing and performance, has been exhibited at the Delfina Foundation (London), Charim Gallery (Vienna), D-Caf Festival (Cairo), Warsaw Museum of Modern Art (Warsaw), Eva International Biennial (Limerick City), Huis Marseille Museum of Photography (Amsterdam), the New Museum (New York), Tate Modern (London), Haus Der Kunst (Munich), 7th Busan Biennial, 11th Istanbul Biennial, Stedelijk Museum (Amsterdam) and the International Center for Photography (New York). Doa Aly is shortlisted for the prestigious Abraaj Group Art Prize 2017.
Born in Cairo in 1972, Islam Zaher completed his BFA at the Faculty of Fine Arts in Cairo in 1994. Zaher is the recipient of multiple awards at the Salon of Youth in Cairo, and was awarded the Grant of Devotion from the Ministry of Culture. His work has been shown extensively in Egypt in solo and group exhibitions including the National Exhibition at the Museum of Modern Egyptian Art and the Palace of Arts, the Youth Salon, Horizon One Gallery at the Mohamed Mahmoud Khalil Museum, Gezira Art Centre, Gallery Misr, Picasso Gallery and Espace Karim Francis.