The Ministry of Culture of Mexico through the National Institute of Fine Arts (INBA), presents Life in the folds, a proposal by the artist Carlos Amorales with the curatorship of Pablo León de la Barra, project representing Mexico in the 57th International Art Exhibition of the Venice Biennale.

Lidia Camacho highlights that in this edition, Mexico commemorates the first decade of its participation with an official pavilion in the Venice Biennale, that is an essential vitrine to promote Mexican contemporary art worldwide. To celebrate this special occasion, the INBA has selected Carlos Amorales with his work Life in the folds, in which the artist “introduces us to a world where prints, sculpture, music, and cinema combine to give life and form to a new way of looking into reality, which materialize critical thinking and today’s problematics in contemporary art”.

Descendant of parent artists, Carlos Amorales studied in Netherlands, and participated in residencies in France and the United States. His artistic explorations led him to generate the Liquid Archive, an image bank that the artist has used in multiple ways, with which has detonated crisis in the communication systems. Here the artist puts at the center of his reflection language, codification, music and the concept of dysfunctionality of art. 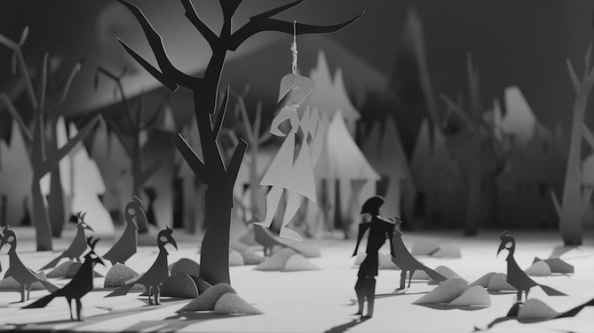 Life in the folds is the outcome of an extensive research, in which the artist introduces a formal language that unfolds in a variety of media within the installation. The exhibition opens with a painting of the series The geometric splendor, a project completed in 2015, and which gave birth to the abstract forms seen in Life in the folds. At the center of the installation is a set of poems written with an encrypted alphabet. The texts, displayed on tables that refer us to paper sheets, imply a transition from the typographic to the phonetic, since each letter, which is a three-dimensional object, is also a ceramic wind instrument: an ocarina that, when played, releases a particular sound for each letter. A graphic score composed by 74 photocopies, made from these characters, is interpreted by a music ensemble with the ocarinas. Part of the installation is the film The cursed village that articulates the diverse levels of language, and which narrates the story of a migrant family that is lynched as they arrive to a foreign town. In the film, a puppeteer controls the characters of the story in a miniature theater, object that is also present in the exhibition and that is activated in a performance by actors and musicians.

Carlos Amorales highlights that Life in the folds, title that makes reference to Henri Michaux’s novel published in 1949, “arises from the tension between the very concrete and the very abstract, it is here where a series of poetic images related to the places where we find life, appear; not in the middle of the pages but in the folds, in the cracks, and in the breaches, in the smallest things”.

The incomprehension of the text requires that the public faces, from bewilderment, an encrypted world where they will have to decipher the messages and to question the diverse interpretations of reality. Life in the folds is a total artwork, one where the different involved disciplines, visual arts, animation, cinematography, music, literature, poetry and performance converge, creating tensions, activating thought and destabilizing its parameters.

In a biennial that, from its title VIVA ARTE VIVA, celebrates art and its capacity of embracing existence and facing the reality of a world full of conflict, Life in the folds invents new vocabularies, languages, images and sounds so that human life can be reinvented.