Hauser & Wirth will present major installations by the legendary German-born Swiss artist Dieter Roth (1930 – 1998), who sought to pulverize traditional boundaries by elevating the processes by which things happen, embracing accidents, mutations, and accretions of detail over time. The effects are seen in the two large-scale works on view: ‘The Studio of Dieter and Björn Roth, Ackermannshof, Basel’ (1995 – 2008), an installation of the actual studio shared by the father and son art-making team, including furniture, books, and other personal items re ecting not just a practice but a prevailing philosophy in which art and daily life are indivisible. Also on view is Roth’s long-term project ‘Flacher Abfall (Flat Waste)’ (1975 – 1976/1992), for which Roth encased food packaging and other detritus in plastic sleeves led in over 600 binders. Other related works and drawings will also be included. 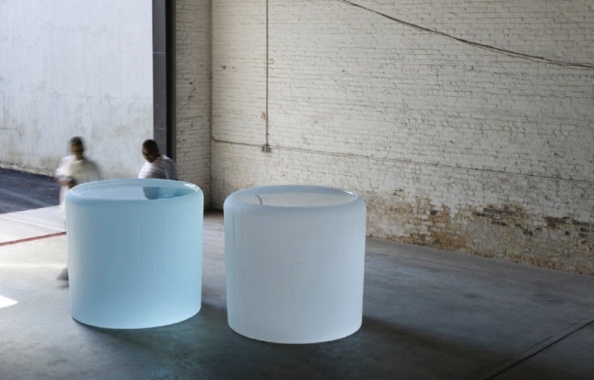 Hauser & Wirth is pleased to present the US debut of four new bodies of work by acclaimed American artist Roni Horn. The exhibition features the photographic opus ‘The Selected Gifts (1974 – 2015)’, a collection of 67 photographs documenting the history of gifts the artist received over a period of 41 years. Also on view are two new bodies of works on paper, The Dog’s Chorus (2016) – shown here for the first time – and Th Rose Prblm (2015), as well as the new glass sculptures ‘Water Double, v. 1’ and ‘Water Double, v. 3’ (both 2013 – 2015). Although materially divergent, these works all derive from longstanding questions and themes that have propelled Horn’s practice and her ongoing poetic study of the protean nature of identity, meaning, and perception.

A fossilized dinosaur egg, leather gloves, two copies of Djuna Barnes’ ‘The Book of Repulsive Women’, and a handmade olive tree are but a few of the objects that appear in ‘The Selected Gifts (1974 – 2015)’ – the majority of which are reproduced at actual size. Photographed with a deceptively affectless approach that belies sentimental value, Horn’s collected treasures oat against pristine white backdrops in the artist’s signature serial style. Together, the sundry gifts tell a story of the self as mediated through both objects and others – what the artist calls ‘a vicarious self-portrait.’ Horn explains, ‘It is a reflection through the warped optic of others that shows a level of accuracy beyond that of any mirror. A portrait I could not have imagined without the unwitting aid of friends, acquaintances, and knowing strangers.’

Embedded in ‘The Selected Gifts (1974 – 2015)’ is not only the passage of time – the earliest gift harks back to 1974 – but also the implication of collaboration, albeit unknowing, between recipient and the gift givers, whose identities remain a mystery to viewers. Horn’s process of sifting through and selecting from her unruly collection of objects further shapes her self-portrait. Laced with humor, ‘The Selected Gifts (1974 – 2015)’ elicits questions about the contingent nature of meaning and identity, a theme situated at the very core of Horn’s art. A chimerical portrayal emerges as the installation unfolds; the myriad objects coalesce into a kaleidoscopic account of the self. ‘The Selected Gifts (1974 – 2015)’ builds upon earlier works by Horn that utilize similar conceptual approaches, including ‘My Gifts, A Selection (1960-2015)’, a chapbook that itemizes gifts the artist received over a span of 55 years, and ‘67 Postcards, A Selection’, a text from 2011 that describes and transcribes all 67 postcard images and captions. The latter is a direct predecessor to ‘The Selected Gifts, (1974 – 2015)’ and has recently been expanded into a limited-edition artist book, ‘82 Postcards’, co-published by Hauser & Wirth Publishers and Steidl.

Unfolding over adjacent gallery spaces, two new major series of drawings similarly weigh humor with larger questions about the fluidity of meaning and identity. The Dog’s Chorus and Th Rose Prblm expand upon the intricate, labor-intensive approach to drawing that Horn has developed since the early 1980s. Beginning with an arguably destructive act, Horn uses a Stanley knife to slice up an original drawing; this act is itself a form of line making. She then reassembles the fragments into something new, creating pulsating grounds that appear tangled. These craggy-edged works are their own islands of incident, where highly tessellated surfaces testify to a meticulous process of creation. Literature has long been a central element in Horn’s oeuvre, where the words of such figures as Emily Dickinson become the artist’s materials. In The Dog’s Chorus, lines from Shakespeare’s ‘Julius Caesar’ merge with common everyday idioms – trite, hackneyed turns of phrase familiar from daily life – and are rendered in rich colors. In bringing together these ‘high’ and ‘low’ forms of language, the artist playfully dislodges texts from their traditional cultural dwelling places, deconstructing and reconstructing language and meaning just as she does physical materials. Her strategically scattered words disintegrate into an almost pixilated chaos.

Following a similar approach for Th Rose Prblm, Horn cuts together two well-worn phrases: ‘Rose is a rose is a rose’ or ‘a rose is a rose is a rose’, with ‘come up smelling like roses’ or ‘coming up smelling like a rose’. Horn further sharpens her conceptual approach to language here, splicing these expressions together in all their possible iterations. Employing what she calls ‘downright dumb humor,’ this series also makes sense from nonsense. As Horn explains, ‘I was interested in the idea of rearranging these phrases into all the possible outcomes. I see it as a metaphor for identity. There are 48 drawings and I’m thinking of it as one work. So cumulatively the shades of meaning obtain a complexity and range that stand in for the mutable, changeable nature of identity.’ The complex, maze-like compositions set Horn’s surfaces into motion.

The Hauser & Wirth exhibition offers visitors vivid access to Horn’s extraordinary process, a method of drawing that she has described as ‘a kind of breathing activity on a daily level’. For Horn, drawing is ‘the form I feel closest to. It may be my true native language.’ Realized through an active act of excavation, Horn’s drawings suggest enormous attention and time – and thus demand the same from viewers. The notion of doubling, important across her oeuvre, is also at play here in a temporal sense: ‘Each drawing is at once itself and the trace of itself,’ she notes. Past and present oscillate as trace and presence, and the artist’s nearly sculptural approach speaks to her interest in the metaphysics of experience.

Nowhere is this interest more palpable than in Horn’s iconic cast glass sculptures. The exhibition at Hauser & Wirth concludes with two of the largest Horn has ever produced: ‘Water Double, v. 1’ and ‘Water Double, v. 3’. While these hulking cylinders appear to be adamantly solid forms, they are actually in imperceptible motion: Glass is neither liquid nor solid, but an amorphous liquid solid that exists between those two states of matter, with atoms moving too slowly for its condition of constant change to be visible. By virtue of this extraordinary duality, glass is an ideal medium for Horn’s exploration of the shifting grounds of meaning and identity. Each of her two new sculptures on view is comprised of two parts that are separated yet palpably connected, proffering us an invitation to contemplate easy, accepted notions of ‘likeness’ and ‘difference’. Reflecting the changing natural light, these works partner with the weather and the constant cycles of time that we measure in days; they mirror our mercurial and unsteady standards of perception. Horn’s enigmatic and insistently present forms are each topped with an oculus. These translucent and highly reflective ‘pools’ of glass act as receptacles for reflections, accumulating snippets of their surroundings in an array of fragments that recall the splintered surfaces of Horn’s drawings. Elegant and deceptively simple, Horn’s forms are in fact extraordinarily ambitious feats of production that upon completion remain open-ended and defy straightforward experience. As ever with Horn, what you see is not necessarily what you get.

In January 2013, Horn was awarded the Joan Miró Prize and JRP Ringier also published the rst major publication to focus solely on Horn’s extensive drawing practice. In March 2017 the Glenstone Museum, Potomac MA opened a major survey exhibition of the work of Roni Horn, selected by the artist herself. The exhibition remains on view until January 2018.