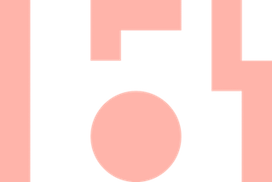 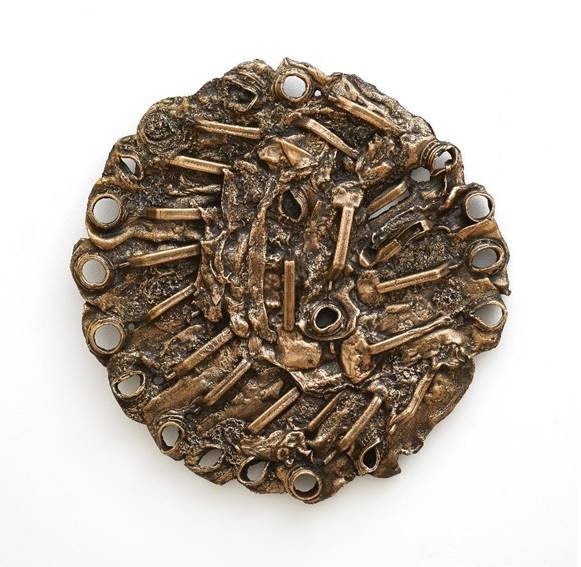 Serge Attukwei Clottey, The Keepers, 2017, Bronze, 30h x 30w in,
courtesy the artist and Gallery 19157, Accra
Gallery 1957 is exhibiting for the first time at a USA fair, 1:54 New York, with recent works by artists Serge Attukwei Clottey and Jeremiah Quarshie. Both artists are based in Accra and work internationally.
On view at 1:54 are Clottey’s new bronze sculptures, charcoal drawings and wall-based sculptural installations – created through cutting, drilling, stitching and melting found materials – and Quarshie’s intricately detailed portraits, characterised by a unique realism combined with the artist’s own distinct visual language.
Clottey is known for work that examines the powerful agency of everyday objects. Working across installation, performance, photography and sculpture, he explores personal and political narratives rooted in histories of trade and migration. In his most recent series of wall pieces, he utilises flattened Kufuor gallons, discarded car tires and wood pieces to form abstract formations onto which he inscribes patterns and text. In doing so, the artist elevates the material into a powerful symbol of Ghana’s informal economic system of trade and re-use. While some surfaces resemble local textile traditions such as ‘Kente’, a key reference in West African Modernism throughout the 20th century, others refer to barcodes and feature Chinese characters in reference to the emergence of new power structures in Ghana. In Clottey’s drawings (Sex and Politics Series, 2016 – ongoing) the artist explores a formalist approach, depicting disjointed figures and faces, not unlike the visions of nude women under Cubism, a European movement which drew heavily from traditional African tribal sculpture. In a new series of works, gallons are cast in bronze and take on a new forms in mask-like sculptures. 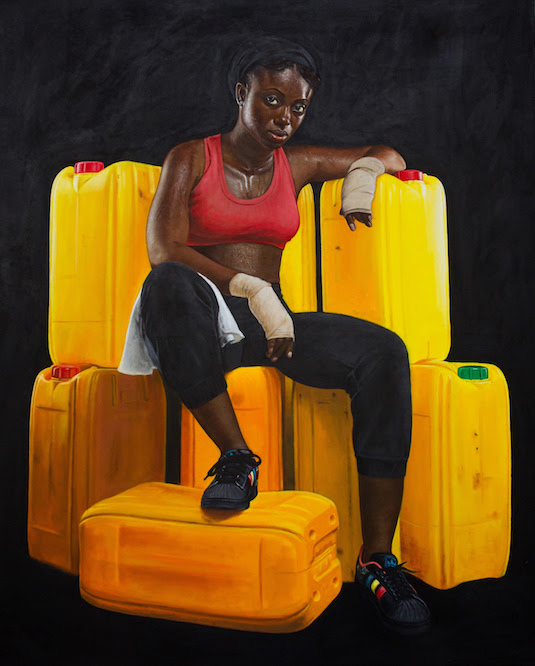 Quarshie’s practice takes its narrative from contemporary life in Ghana, with particular emphasis on the passage of water throughout Accra—as embodied through the yellow “Kufuor” gallons used for storing and carrying it. Appropriating from Old Masters’ traditions and aspects of studio photography, his work questions the construction of imagery and the boundaries of portraiture. Works from his recent Yellow is the Colour of Water series exhibited at Gallery 1957 have recently been acquired by The Harn Museum of Art, Florida, the Zeitz Collection, Cape Town and the Seth Dei Collection, Accra, among other private and institutional collections. Quarshie is currently in residence at African Artists’ Foundation (AAF) in Lagos, Nigeria.

Since opening in 2016, the gallery has held solo exhibitions by Serge Attukwei Clottey, Zohra Opoku, Jeremiah Quarshie and crazinisT artisT, with each show expanding outside of the gallery through a public programme. Gallery 1957 has supported cultural initiatives unique to Ghana including Asa Baako Music Festival and Chale Wote Festival, as well as hosting a series of talks, off-site projects and performances. The gallery was selected as ‘one of the world’s top galleries of 2016’ by Modern Painters and included byArtsy as one of 15 Galleries ‘Putting New Cities on the Art World’s Map.’ Gallery 1957’s forthcoming programme includes exhibitions with Gerald Chukwuma, Yaw Owusu and Godfried Donkor. 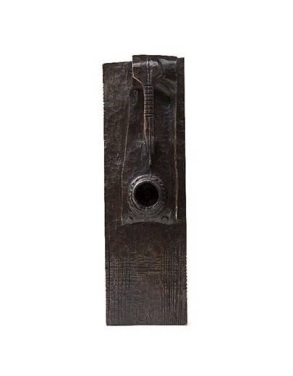 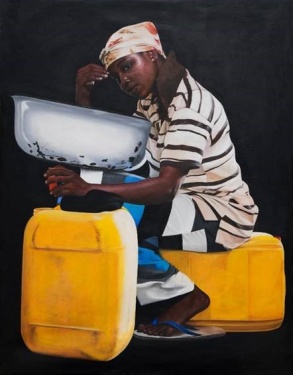 About Jeremiah Quarshie
Born in 1985 in Accra, Quarshie studied fine art at Ghana’s Kwame Nkrumah University of Science and Technology (KNUST) in Kumasi. Quarshie lives and works in Accra and held his first solo exhibitionYellow is the Colour of Water at Gallery 1957 (2016). He is in residence at African Artists’ Foundation Lagos, Nigeria, from March – May 2017. Quarshie’s paintings have been included in exhibitions internationally including: The Gown Must Go To Town…, National Museum of Science and Technology, Accra (2015); Silence Between the Lines, Prime Motors Ltd., Kumasi (2015); The Munich-project, Global Art — Local View, Villa Mohr, Munich (2014); Muses, Goethe Institut, Accra (2013); The ‘Sabi Yu Rutu’ project, Suriname (2013); Kaleidoscope, La Villa Boutique, Accra (2013); Time, Trade and Travel, Nubuke Foundation, Accra and Stedelijk Museum Bureau Amsterdam (SMBA), Amsterdam (2012); andThe Ghana-project, Global Art — Local View, Goethe Institut, Accra (2012). His works are in the collection of Seth Dei, a collector who has the largest private collection of contemporary Ghanaian painting in Ghana.
http://1-54.com/new-york/