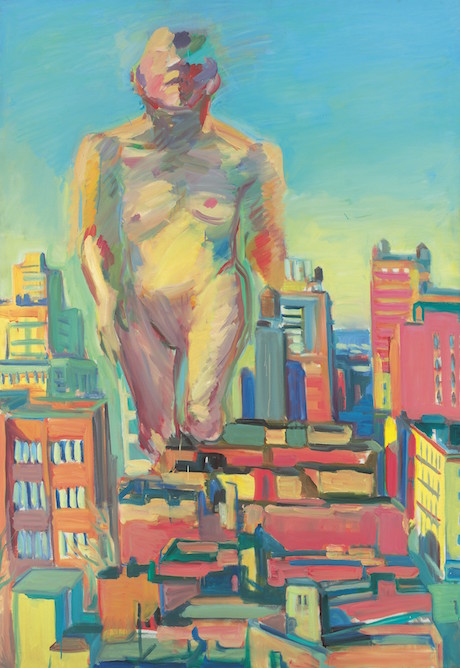 Maria Lassnig – Woman Power 1979
Oil on canvas The Albertina Museum, Vienna. Essl Collection
© Maria Lassnig Foundation; Graphisches Atelier Neumann, Vienna
Maria Lassnig – Woman Power
24 March – 25 June 2017 Florence
Maria Lassnig (1919–2014) stands alongside Louise Bourgeois, Joan Mitchell, and Agnes Martin as one of the most important women artists of the 20th century. The exhibition Woman Power at the Uffizi Gallery’s sister-museum in Palazzo Pitti is the first-ever museum exhibition of Maria Lassnig’s work in Italy, where she received one of the world’s most prestigious lifetime achievement awards—the Golden Lion of the Venice Biennale—in 2013. This exhibition and its catalogue contain individual works from the Maria Lassnig Foundation but otherwise almost exclusively feature loan works from the Albertina. It was early on that Maria Lassnig placed her own body at the centre of her art, long before body awareness, body language, and relations between men and women became central themes of the international avant-garde. The overwhelming majority of Lassnig’s works are self-portraits. But actual physiognomy only plays a subordinate role here, because outward appearances for the most part serve merely as a visible surface beneath which lies a keenly palpable inner world.

Maria Lassnig – Woman Power shows works from five decades, ranging from Lassnig’s body awareness paintings of the 1960s to the more realistic works of her New York period and including several masterpieces such as this exhibition’s namesake, in which the larger-thanlife artist goes on a destructive, King Kong-like rampage through New York City, as well as examples of her formidable late oeuvre. This broad selection makes clear her constancy, her development as an artist, and the formal transformations through which her work went. Elke Schmidt, the new director of the Uffizi and Palazzo Pitti, has plans to place an increased emphasis on women artists. It is a little-known fact that the Uffizi Gallery’s collection includes numerous self-portraits by women created from the 17th century onward (including one by Maria Lassnig from 1981), and it is also home to Europe’s largest holdings of 19th -century artworks by women. For Schmidt, this Maria Lassnig exhibition embodies both a feminist statement and the beginning of a long-running series, the idea for which arose in talks with the Guerrilla Girls. For over 30 years, the Guerrilla Girls—a group of art activists rendered anonymous by gorilla masks—have been criticising sexism and discrimination in the art world.

Curator: Wolfgang Drechsler;
collection catalogue to be published in an Italian/English edition.
The exhibition is a cooperation with The Albertina Museum, Vienna.
Piazza dei Pitti, 50122 Florence Toskana
http://www.uffizi.it/index.php?it/172/palazzo-pitti
http://www.albertina.at/press/maria_lassnig_woman_power
http://www.gallerieuffizimostre.it/2017/mostra4/main/