The Museum of Modern Art in Warsaw invites to the
opening of its new premises on the banks of the Vistula river.

The temporary exhibition pavilion is designed by Austrian architect Adolf Krischanitz. The pavilion was made available to the Museum through a collaboration with the Vienna-based Thyssen-Bornemisza Art Contemporary (TBA21) foundation, founded in 2002 by Francesca von Habsburg.

The Museum on the Vistula will be inaugurated with the exhibition “The Beguiling Siren Is Thy Crest.” This exhibition delves into the cultural connotations of Warsaw’s iconic symbol—the city’s coat of arms, “Syrena,” is decorated with an insignia of a woman with a fishtail, wielding a sword and shield—and its universality in the context of a modern urban identity. Those visiting the newly opened pavilion can view historical materials—works of art and artefacts—as well as pieces by contemporary artists inspired by the mythological siren.
The Museum of Modern Art in Warsaw invites everyone to a picnic by the river with sirens, artists, music and good food to celebrate the new exhibition space. 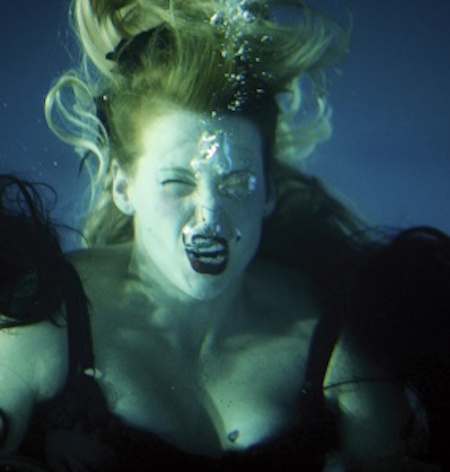 Those visiting the newly opened pavilion can view historic materials – works of art and artefacts – as well as creations of modern artists inspired by the mythological siren. This exhibition, the first ever of this scale to discuss the siren, aims to portray and activate her potential as a symbol. It combines different takes on hybridity, national identity and mythology.

The title of the exhibition is a quote from a poem by Cyprian Kamil Norwid (one of the great Polish romantic poets), who addresses Warsaw by means of a personal invocation (“capital of my youth…”) and formulates a reminder that the mythological siren was originally a dangerous hybrid of a human and animal (specifically a bird with a woman’s head), that lured sailors to their doom. The poet calls upon the origins of Warsaw’s coat of arms to explain his multifaceted relationship with the city. This quote proved deeply inspiring to the exhibition’s creators.

Depictions of the siren have changed so often over the centuries, that the one thing they all have in common seems to be her dualistic, hybrid nature: she is both human and animal. Appearing on Warsaw’s medieval coat of arms is – surprisingly – a half-man, half-dragon figure. The image of the fish-woman became prevalent as late as the beginning of the 18th century. The exhibition focuses on this diversity of forms. The birdlike siren is depicted (among others) in Pablo Picasso sketches, the collages of Anglo-American surrealist Penny Slinger or the paintings of Dorota Jurczak.

Sirens are accompanied by other hybrids, eagerly depicted in the second half of the 19th and the first decade of the 20th century, in the Symbolism period, in the works of Jacek Malczewski, Wacław Szymanowski, Félicien Rops. Reflected in their art is a crisis of the bourgeoisie and the very rules of language. Depicting hybrid forms fulfils eccentric fantasies, symbolically breaking the suffocating norms of society. The avant-garde movements of the 20th century find in the Siren their own symbol of emancipated sensuality. This is evident in the works of surrealist Dorothea Tanning, Leonor Fini, and Louise Bourgeois.The motif of the siren activates queer themes as well, for instance in Wolfgang Tillmans famous photograph “Lutz, Alex, Suzanne & Christoph on the Beach” or the sculpture “Him” (by Danish duet Elmgreen & Dragset), which depicts the Copenhagen Little Mermaid as a man. Selected works reflect on the economic crisis, as well as Anthropocene – a new epoch in Earth’s history, shaped by man (Liz Craft and her “Spinster” or Jerzy Szumczyk’s outdoor installation). Anne Uddenberg installations present the motif of the siren in a different, modern light of perfecting the human condition and nature through technology (transhumanism). Aleksandra Waliszewska’s drawings, on the other hand, provide a glimpse into dark phantasies dwelling under the skin of a city by the river. Although this artist draws inspiration from historic works of art, she explores very modern fears of the unknown and of the city: a system complex enough to birth its own mythologies. This many of Waliszewska’s drawings of sirens were never on display before. The accompanying program will also feature Agnieszka Smoczyńska’s film “The Lure” – an 80s-stylized tale of two Vistula-dwelling sirens, awarded at Sundance festival 2016.

The siren must be heard – that’s why the whole exhibition is enveloped in the voice of Juliana Snapper, an American artist, who sings underwater. Her submerged opera was performed in Warsaw, at the Palace of Culture’s swimming pool, in 2010.

The Mermaid of Warsaw is a symbol that doesn’t bind forcefully, but organises the community while allowing it to remain diverse.