Mark Tobey: Threading Light is the first comprehensive retrospective of the American artist’s work in twenty years. The exhibition traces the evolution of the artist’s groundbreaking style and his significant yet under-recognized contributions to abstraction and mid-century American modernism. With 70 paintings spanning the 1920s through 1970, Mark Tobey: Threading Lightsurveys the breadth of Tobey’s oeuvre and reveals the extraordinarily nuanced yet radical beauty of his work.

Organized by the Addison Gallery of American Art, Phillips Academy, Andover, Massachusetts, it will be the first comprehensive exhibition of Mark Tobey’s distinctive and original work in more than forty years and will provide further insight into his intriguing oeuvre and its complicated and contradictory receptions in the United States and abroad. Curated by independent scholar Debra Bricker Balken, the exhibition will include approximately eighty paintings from the late 1920s until his last works of the 1970s and will be accompanied by a catalogue published in English and Italian editions. Coinciding with the 57th Venice Biennale the exhibition will debut at the Peggy Guggenheim Collection and then be presented at the Addison Gallery of American Art.

Mark Tobey: Threading Light traces the evolution of the artist’s groundbreaking style and his significant yet under-recognized contributions to abstraction and mid-century American modernism. With 70 paintings spanning the 1920s through 1970, Threading Light surveys the breadth of Tobey’s oeuvre and reveals the extraordinarily nuanced yet radical beauty of his work. The first comprehensive retrospective of Tobey’s work in two decades, Threading Light provides a thoughtful re-appraisal of Tobey’s work.

One of the foremost American artists to emerge from the 1940s, a decade that saw the rise of abstract expressionism, Mark Tobey (1890–1976) is recognized as a vanguard figure whose “white-writing” anticipated the formal innovations of New York School artists such as Jackson Pollock. When Tobey first displayed his paintings composed of intricate, pale webs of delicate lines in New York in 1944, he generated much interest with his daring “all-over” compositions that eliminated narrative and three-dimensional space but retained references to the human figure.

His unique calligraphic renderings largely invoke the city and are the outcome of a lyrical integration of both Eastern and Western visual histories that range from Chinese scroll painting to European cubism. This unique form of abstraction was the synthesis of the artist’s experiences living in Seattle and New York, his extensive trips to Hong Kong, Shanghai, Kyoto, and Europe, and his conversion to the Bahá’í faith. Tobey stated, his work was not bound by a geography or a country but aimed for a “higher state of consciousness.” It bridges the international dimensions of midcentury modernism, a connection that has been previously unexplored in the discourse on postwar art.

Mark Tobey: Threading Light is organized by the Addison Gallery of American Art, Phillips Academy, Andover, Massachusetts and is guest curated by Debra Bricker Balken. The exhibition will open at the Peggy Guggenheim Collection in Venice, Italy, on May 5 and run through September 11, 2017, before opening at the Addison.

The exhibition is accompanied by a fully illustrated, 208-page scholarly catalogue, published by Skira Rizzoli in English and Italian, that documents many of Tobey’s most accomplished works and includes a comprehensive examination of Tobey and his cultural context by Balken, whose thorough and original research addresses the prescience of Tobey’s style and his unique place in American art.

Mark Tobey: Threading Light was made possible with generous support from the Sidney R. Knafel Exhibition Fund, Peter and Elizabeth Currie, Stephen C. and Katherine D. Sherrill, and the Josef and Anni Albers Foundation. An important contribution from Douglas and Janet True made the catalogue possible.

Peggy Guggenheim Collection
Getting there 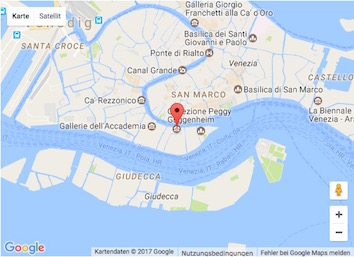