Pluridisciplinary Lebanese artist, composer and visual artist, Zad Moultaka is representing Lebanon at the 57th International Contemporary Art Exhibition of the Venice Biennale, With his monumental work ŠamaŠ, Zad Moultaka combines musical invention with visual research in a radical approach in which technology is born from the archaic.
Haunted by the idea of joining the shores of East and West in a single voice, Zad Moultaka is erecting a monument to ŠamaŠ in the Arsenale Nuovissimo. The Babylonians’ god of the sun and justice is depicted on the Code of Hammurabi, a tall stele considered the first law table.

By having a monumental bomber motor ‘sing and setting it against a sparkling wall evoking the Golden Calf, he is attempting to conjure up the foretold Arab apocalypse with this crepuscular chanted relic.

With ŠamaŠ, Zad Moultaka confronts barbarism with his own arms in a vibrant appeal, a synergy of forms, materials and sounds under the artistic curatorship of Emmanuel Daydé, art historian and critic.

‘The ŠamaŠ project has its origin in the Code of Hammurabi, considered the first code of law, engraved on a tall, black basalt stele nearly 2,000 years before our era. At the top of this majestic totem is represented ŠamaŠ, the Sun god. Just as light disperses shadows, ŠamaŠ exposes evil in full light and puts an end to injustice.’

‘Moultaka contrasts the implacable documentary school brought by Joana Hadjithomas and Khalil Joreige, and emotional Expressionism, conveyed in the past by Marwan or today by the Baalbaki brothers, with a cosmogonic archaism that is unheard-of in the Arab world.’

A highly-awaited return of Lebanon
to the Biennale di Venezia

Long absent from the international scene in Venice, Lebanon first outfitted itself with a national pavilion in 2007, at the 52nd Venice Biennale. Supported by the Lebanese Ministry of Culture, it was installed in a former brewery on the island of the Giudecca and was the occasion for a collective exhibition (Foreword). A diversified panorama of the Lebanese art scene, this exhibition brought together Fouad Elkoury, Lamia Joreige, Walid Sadek, Mounira Al Solh and Akram Zaatari. Lebanon’s last participation in the Venice Biennale dates from 2013, when it was represented by the video artist Akram Zaatari, with his video installation Letter to a Refusing Pilot, in the heart of the Arsenale. In 2017, Lebanon is making its return to the Biennale with Zad Moultaka’s installation ŠamaŠ.

Zad Moultaka : ‘Everything was resting in Ur’

‘Within our civilisation, which is becoming lost on the shores of materialism and drowning on the surface of the visible, it is imperative and urgent to question the sacred in the very heart of Man. The project of the Lebanese pavilion for the Venice Biennale intends to be at the centre of this questioning through a spatial, temporal and sound dialogue between Ur in Iraq, Beirut in Lebanon and Aleppo in Syria, sites of terrible violence past and present, full of symbolic power of the Near East. It will take place in the former civilian and military shipyard of the Venetian fleet.

ŠamaŠ is rooted mentally, physically and philosophically in the refusal of the drama that we are witnessing in this solar region of the world that is the Middle East, cradle of eastern and western civilisations. The Arab apocalypse, which threatens to put an end to these civilisations, is not unavoidable. Under Syria’s bombarded skies, one can still glimpse the emergence of the first codes of Babylonian laws and the desire of a wild peace. Today’s Man has been ripped from the soil and fallen down from the sky. Deaf and blind to the essence of things, he is programming his own obliteration, hastening with it, by anxiety, the crumbling of the world…’

‘The Golden Calf is still alive’

‘Zad Moultaka’s project for Venice is one of adoration of the sovereign driving force of all things, this god who has governed us since Aristotle. Refusing the indifferent machinism of Marcel Duchamp, whose fascination with airplane propellers is familiar to us, to prefer the electronic vibrations of the vibrant Polytopes – those sound and light areas that Xenakis created in Persepolis, Mycenae and Cluny -, this black totem in the form of a war machine, erected in the night of the Arab soul, diffuses hindered chants and garbled litanies. This ode to solar blood and mechanical dramaturgy has its source in the laws decreed to all Mesopotamia by Hammurabi and the sacred Sumerian texts relating a procession towards a solar temple. But this driving force of Babel relies just as much on Arman’s concrete Hope for Peace tower, accumulating tanks and cannons, erected in Beirut after the Lebanon war, or else the monolith, purveyor of intelligence, in 2001: A Space Odyssey. The processional path leading to the motoric temple runs into the gigantic wall sparkling with the powers of money, always ready to melt death into gold.

The oldest code of law to have come down to us to date, carved in stone c.1750 BC in Mesopotamia, the Code of Hammurabi has today become the crepuscular relic of a collapsing world. Its programmed disappearance once again calls the cries and whisperings of the Lamentation for the City of Ur, the lament which was recited, weeping, 4,000 years ago before the wall of Abraham’s devastated city and which resounds again today, chanted by the voice of a native of those parts.

Hammurabi’s tall stele is carved in a monolith of black basalt extracted from the mountains of Zagros. Its convex peak is sculpted in bas-relief on the front, depicting a scene where King Hammurabi of Babylon meets the god ŠamaŠ (pronounced ‘Shamash’). The Akkadian name for the Sun God, ŠamaŠ is derived from šamšu(m) and the Arabic šams, which also means ‘sun’. Just as the sun dispels darkness, this god, guarantor of justice, exposes evil and injustice in full light. Today, having become the sovereign driving force in the survival of the strongest, ŠamaŠ is also a palindrome, oscillating between justice and injustice.

Who is ŠamaŠ today? What is this golden calf we worship? What is this god of war who charms us with his destructive threnodies and convinces us to kill one another? What is this song of bombs that drowns out the song of the Earth? What is this lordly droning that annihilates our humanity and thinking? And which heaps praise on his power?’ 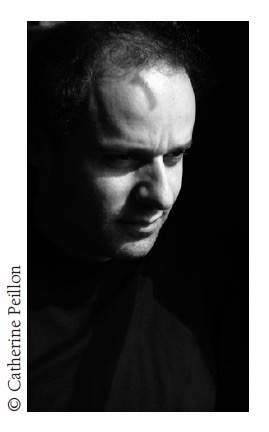 Born in 1967, Zad Moultaka began studying piano at the Beirut Conservatory at a young age. In 1984, driven out by the civil war, he left Lebanon and moved to Paris, where he continued his musical and instrumental training. Enrolling at the Paris Conservatoire in 1989, three years later he began a brilliant international career as a piano soloist. Alongside his musical studies, Moultaka took courses in drawing and painting in the municipal studios. In the late 1990s, he brought his soloist’s career to an end to devote himself to composition and painting, which had too long remained in ‘underground form’, a ‘time torn from musical writing’. As a painter, Moultaka created works on paper with walnut stain and ink then, in the first decade of the new millennium, large abstract acrylic paintings. As a composer, he deepened his musical and stage language, in which he integrates the modalities of contemporary western writing with rhythmic patterns specific to Arab music. Invited by the leading festivals (international Music Festival of Baalbek, Lebanon, Concertgebouw of Amsterdam, Festival d’Aix-en-Provence, Festival de Radio France, Venice Biennale of Music, Montreal’s Arab World Festival, operas of Mainz and Stuttgart in Germany…), his musical palette covers choral and chamber music, opera, electro-acoustic composition and sound installation, as well as choreography. He has created, amongst others, Zàrani (2002), Nepsis (2005, on a poem by Etel Adnan), La scala del cielo (2006), L’Autre rive (2009), La Passion selon Marie (2012), Il regno dell’acqua (2013), and La Passion d’Adonis (on texts by the exiled Syrian poet Adonis, 2015-16). In October 2016, at the invitation of Jean de Loisy and in partnership with IRCAM, Zad Moultaka gave the first performance of Montée des ombres in the Tuileries Tunnel, a musical and visual procession from the prehistoric ages, during the emergence of articulated speech, in the framework of Paris’s Nuit Blanche event.

In the 2010s, Zad Moultaka has devoted himself more intensely to his pictorial research. In 2011, he participated in the ‘Rebirth’ exhibition, organised by Janine Maamari at the Beirut Exhibition Center. The following year, Nadine Begdache devoted a first monographic exhibition to him at the Galerie Janine Rubeiz in Beirut: ‘Le Feu de l’eau’. At the last Venice Biennale, in 2015, Zad Moultaka showed a new series of large-sized paintings, ‘Come in terra’, at the Palazzo Albrizzi, curated by Emmanuel Daydé. Moultaka’s pictorial gesture is in harmony with his musical research, focussing on common motifs, forever inexorable for the artist, who was profoundly marked by war: wrench and separation, Earth’s violent time immemorial, memory and the instant facing the mute silence of heaven, the impossible reconciliation of opposites. Moultaka composes his large formats of torn painted papers in a nervous, solitary gesture having its source in the Lebanese mountains of his birth. The earth and its elements, especially and above all water, which, in this work on depths, comes to lash and infiltrate the support, the paper in all its fragility, confronting pigmentary colour, essence or resins. Zad Moultaka’s pictorial forms are surfaces of rocks, folds of ancestral caves, where mineral erodes and vies with the crumbling of the world and earthquakes. In 2016, creating the musical piece UM, sovereign driving force of all things, inspired by the Tibetan Book of the Dead and by a Ferrari engine, the artist extirpated for the first time the unknown sacred chant that remained enclosed within the machine.

Emmanuel Daydé, art historian and critic and essayist, is the curator of this exhibition at the Lebanon Pavilion.

‘Questioning the musical imagination of a distant or even archaic age is not merely a composer’s speculation: above all, it is the whole quest of an ancient energy, a space rooted in beliefs linking Man’s destiny to something that goes beyond appearances, a space buried nowadays under the rubble of a terribly superficial world. Far from any sort of historical reconstruction, this is a matter of seeking in oneself the debris of a salutary archaism, simply allowing for reorienting oneself on an interiority, desecrated by an excess of the apparent.’

The musical piece ŠamaŠ Itima (Dark Sun), an integral part of the ŠamaŠ installation for the Lebanese Pavilion at the Venice Biennale, is the fourth to be inspired by ancient languages, after Baal for orchestra, Anath for bass voices and instrumental ensemble, and Leipsano for orchestra and three choruses. ŠamaŠ Itima, Zad Moultaka’s new original creation for 32 singers, takes its text from the hymn to the Sumerian god of justice, drawing on an Akkadian lexicon of mutilated words, amputated as if after the deflagration of a missile falling right in the middle of the language. Whilst the human, terrestrial voices have trouble advancing in muddy matter that imprisons sounds, a celestial melody hovers overhead, a strange melody arising from the reactor of a bomber dating from the 1950s. In this tragedy befalling the Middle East, ŠamaŠ thus makes violence sing for want of silencing it.