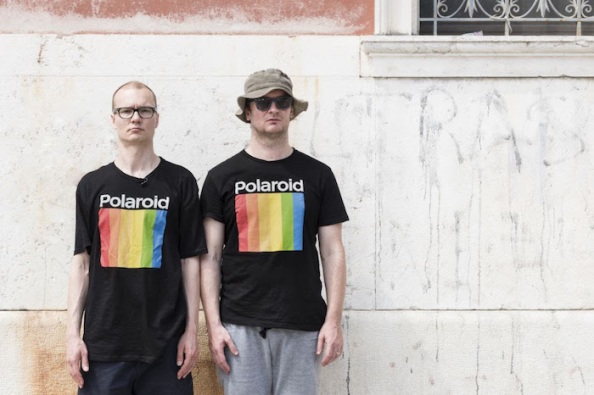 Artists Nathaniel Mellors and Erkka Nissinen will present their first collaboration, The Aalto Natives, in the Finnish Pavilion at the 57th International Art Exhibition – La Biennale di Venezia. Opening on 13 May, the exhibition is the flagship contemporary art event included in Finland’s official centenary programme. Its patron is Mrs Jenni Haukio, the spouse of the President of Finland.

Individually known for their irreverent and often comedic story-driven work, in which a humorous approach deceivingly belies a profound inquiry into contemporary issues of morality and power, Mellors and Nissinen will focus on various clichés surrounding Finnish history and national identity in The Aalto Natives.

The installation will be conceived for the architectural and ideological context of the Finnish Pavilion, designed by architect Alvar Aalto in 1956. Conflating ideas and tropes from archaeology, anthropology and science fiction, it will re-imagine Finnish society.

“The Aalto Natives explores themes such as the invention of national identity and the origins of culture by way of absurdist satire. Dressing its intellectual ambitions in purposefully silly gear, it both addresses the complex challenges our globalized world faces today, and pokes a cheeky kind of fun at the political correctness of its discourse,” says curator Xander Karskens.

In The Aalto Natives, the artists, who share an interest in the capacity of absurdism and transgression to critique power structures and the status quo, bring together Nissinen’s intuitive, do-it-yourself attitude to image production and his penchant for naïve musicality, with Mellors’ writing-based approach to filmmaking, and integration of sculpture.

“We wanted to take a cosmic perspective on nationalism — a comic-cosmic perspective on national identity, creation mythology, transnational movement, bureaucracy and class & racial stereotyping. We started with the idea of creation mythology – it seemed both absurd and necessary. We took a trip to the Ateneum in Helsinki, looked at the Kalevala paintings and talked about the role of the egg-laying duck. We realized that Finland is part of a broader genus of eggbased civilizations,” say the artists.

The Venice Biennale, located in the Giardini and Arsenale directly in the historic centre of Venice, will open to the public on 13 May. The Art Biennale, which rotates with the Architecture Biennale every other year, is expected to attract approximately half a million visitors. Along with the national exhibitions, the Biennale hosts a large main exhibition of 120 artists in the Italian Pavilion. This year the main exhibition Viva Arte Viva is curated by Christine Macel, Chief Curator of Centre Pompidou in Paris.

“The Venice Biennale is the oldest and one of the most prestigious international exhibitions of contemporary art, which always manages to capture the zeitgeist of the world in a magical way. The Aalto Natives exhibition is by far the most international production we have ever seen in the Finnish Pavilion. With their very special take on the global state of affairs, Erkka Nissinen and Nathaniel Mellors will provide us with a viewpoint like no other,” says Raija Koli, Director of Frame and the commissioner of the exhibition. 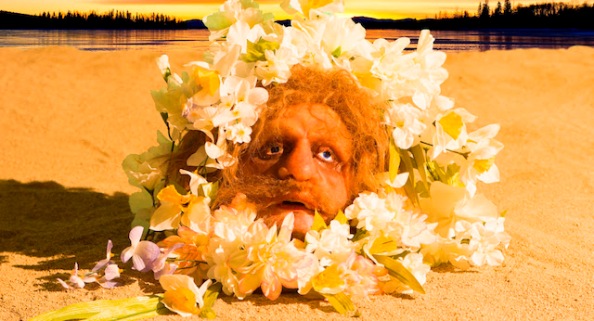 About the artists and curator

Erkka Nissinen (1975, Jyväskylä) studied at The Slade School of Fine Art in London and gained an MFA degree from the Academy of Fine Arts in Helsinki, Finland in 2001. In 2007-8 he was a resident at the Rijksakademie van Beeldende Kunsten in Amsterdam. Nissinen was awarded the Illy Prize at Art Rotterdam in 2011, and the AVEK Prize for media art in 2013. He has over the years created a series of video works and installations featuring a resourceful do-it-yourself deployment of both vernacular and digital tools to craft an absurdist comical-philosophical universe. Here, topics such as social interaction, sexuality, violence and the origins of human consciousness and creativity are addressed in cartoonesque narratives populated by a cast of hyperbolic characters, often performed by the artist himself. Nissinen lives in New York. Nathaniel Mellors (1974, Doncaster, UK) studied at the University of Oxford‘s Ruskin School of Drawing and Fine Art, and the Royal College of Art in London. In 2007-8 he was a resident at the Rijksakademie van Beeldende Kunsten in Amsterdam. Mellors is also an advisor at the Rijksakademie voor Beeldende Kunsten, Amsterdam and a Senior Lecturer at Leeds Beckett University, in the UK. In 2011 he was the recipient of the Cobra Museum Amstelveen’s Cobra Art Prize. In 2014 Mellors was awarded the UK Contemporary Art Society Prize. Mellors’ work often takes the form of absurdist fantasy used to address serious themes. His irreverent, absurd and hilarious videos, sculptures, performances and installations challenge notions of taste, morality, and intelligence. Mellors lives in Los Angeles and Amsterdam.

Xander Karskens (NL, 1973), curator of the Finnish national pavilion at the 57th Venice Biennale, recently assumed the post of artistic director at the Cobra Museum of Modern Art in Amstelveen, where he collects and exhibits the art of the the CoBrA group in relation to developments in contemporary art and discourse. Before, he was responsible for the contemporary art programme and collections at Frans Hals Museum | De Hallen Haarlem, where he worked with both Mellors (in 2010) and Nissinen (in 2015) on solo exhibitions, and acquired their work for the museum’s collection. Frame Contemporary Art Finland is an information centre and advocate for Finnish contemporary art. Frame supports international initiatives, facilitates professional partnerships, and encourages critical development of the field through grants, visitor programmes, curator residencies, seminars and talks, exhibition collaborations and network platforms. Frame is in charge of the Finnish participation in the Venice Biennale alongside other major international art events.

“I am drawn to art that creates a world of itself”

Xander Karskens is the curator of the Finnish Pavilion at the 2017 Venice Biennale. He is working with artists Erkka Nissinen and Nathaniel Mellors on The Aalto Natives, their joint exhibition opening at the Aalto Pavilion this May. Karskens also recently took up the post of artistic director at the Cobra Museum in Amstelveen, where we caught up with him for a brief interview.

Xander Karskens
Curator of the Finnish national pavilion at the 57th Venice Biennale, Xander Karskens recently started as artistic director at the Cobra Museum in Amstelveen, where he collects and exhibits the art of this post-war avant-garde in relation to developments in contemporary art and discourse. Before, he was responsible for the contemporary art program and collections at Frans Hals Museum | De Hallen Haarlem. Earlier international exhibitions projects Karskens organized include Ghost in the system – scenarios for resistance at NCCA Moscow (2013) and FOCUS:the Netherlands at ARCOmadrid in 2012.

Pasi Myllymäki, Mika Taanila and “Mirrored”
Mirrored is an exhibition to feature in the 2017 edition of the Nordic Pavilion at the Venice Biennale. This group exhibition will highlight works by six artists of different generations: Siri Aurdal, Nina Canell, Charlotte Johannesson, Jumana Manna, Pasi “Sleeping” Myllymäki, and Mika Taanila.
“The artists in Mirrored present a mapping of connections that override the national and regional boundaries, and instead track a more multi-faceted view of how artistic practice may connect,” says curator Mats Stjernstedt. 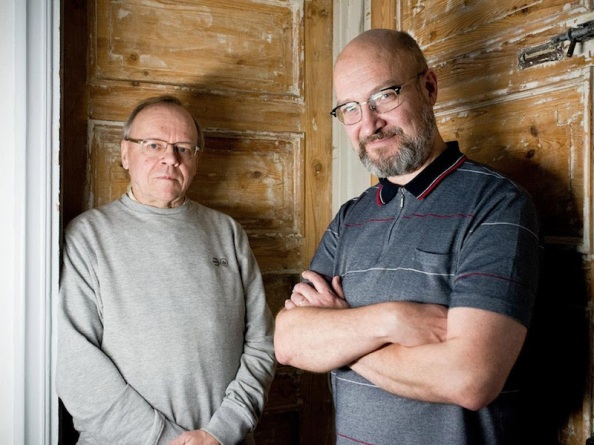 The two Finnish pavilions at the Venice Biennale, the National Alvar Aalto Pavilion and the Nordic Pavilion shared with Norway and Sweden, are located in the heart of the historical biennale park, the Giardini di Castello. The Finnish Pavilion was designed by renowned Finnish architect Alvar Aalto (1898–1976) in 1956. Having itself newly celebrated its 60th anniversary, the Pavilion now also honours Finland’s centenary with its forthcoming exhibition.

The Alvar Aalto Pavilion – a unique fusion of light and dismountable wall and roof units – was designed in such a way that it could be dismantled and stored between exhibitions or re-erected on other sites. Owing to errors in production, however, it has remained immovably in place since the summer of 1956. 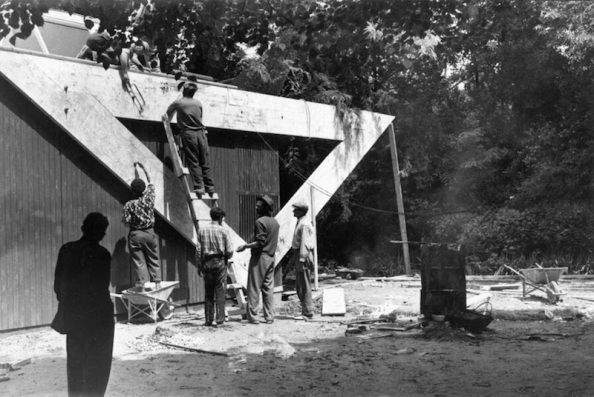 Restored in 2011, Finland now hosts Biennale exhibitions in the pavilion. From 1962 to 2007 it was rented to other countries; however, since 2007 – with support from The Finnish Ministry of Education and Culture – it has served as a venue for exhibitions of Finnish artists as part of the Biennale programme.

Pavilion of Finland
The two pavilions of Finland – National Alvar Aalto Pavilion and the Nordic Pavilion are located in the heart of the historical biennale park, Giardini di Castello. The Finnish Pavilion was designed by renowned Finnish architect Alvar Aalto (1898–1976) in 1956. The structure – assembled of light, dismountable wall and roof units – was designed in such a way that it could be dismantled and stored between exhibitions or re-erected on other sites. Owing to errors in production, however, it has remained immovably in place since the summer of 1956. Restored in 1990, it is now used by the Biennale for temporary exhibitions. From 1962 through 2007 the pavilion was rented to other countries, however since 2007 with the support from The Finnish Ministry of Education and Culture it has been used to exhibit Finnish artists as part of the biennale programme, including IC-98 (Visa Suonpää & Patrik Söderlund) in 2015 and Antti Laitinen in 2013. 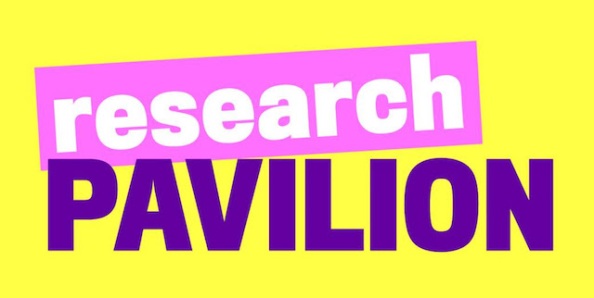 University of the Arts Helsinki hosts a Research Pavilion in Venice

University of the Arts Helsinki will launch a Research Pavilion in May in the context of the 57th Venice Biennale. During a period of five months, the Pavilion will host three contemporary art exhibitions and over forty multidisciplinary events.

Under the theme Utopia of Access, the Pavilion invites a variety of interpretations and experimental methods addressing  urgent topics of debate. Over a hundred artist-researchers from European art universities will contribute to the Pavilion with works from the fields of contemporary art, music, dance, theatre, performing arts, and curating. 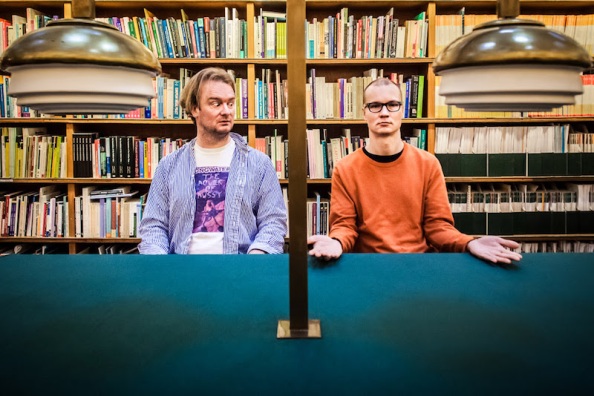 Nathaniel Mellors
Nathaniel Mellors is an Amsterdam and Los Angeles based artist working across a wide range of media. In 2014 Mellors was awarded the UK Contemporary Art Society Prize, and was the recipient of the Cobra Museum Amstelveen’s Cobra Art Prize in 2011. From 2013-14 he was artist-in-residence at HAMMER Museum, Los Angeles and MONASH, Melbourne, Australia. Recent solo exhibitions include at The Box Gallery, Los Angeles (2016); Stigter van Doesburg, Amsterdam (2014); art:concept, Paris (2014); Matt’s Gallery, London & Salle de Bains, Lyon (2012); I.C.A., London (2011). Mellors has participated in The Great Acceleration –Taipei Biennial (2014); ILLUMInations – the 54th Venice Biennale (2011); In The Days of the Comet – British Art Show 7 (2010-11); Altermodern, Tate Triennial (2009), Biennale de Lyon (2007) and Art Now: The Way in Which it Landed, curated by Ryan Gander at Tate Britain (2008).

Catalogue: A catalogue will accompany the exhibition,
published by Frame Contemporary Art Finland and distributed
by Mousse Publishing.
Supporters
The main partner for the exhibition is the Kiasma Museum of Contemporary Art, along with Visit Finland and the City of Jyväskylä. The main supporter of the exhibition is the Ministry of Education and Culture of Finland, together with the Mondriaan Fund, Rijksakademie van Beeldende Kunsten, the Saastamoinen Foundation, the Promotion Centre for Audiovisual Culture AVEK, Suomi Finland 100 and the Embassy of Finland in Rome. 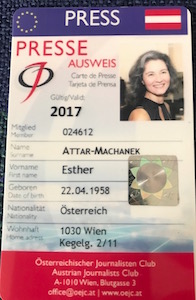