Ali Bilge Akkaya’s second solo exhibition entitled “Two or Realistic Stories of Coincidental Times” can be visited between at x-ist.

Ali Bilge Akkaya’s second solo exhibition at x-ist entitled “Two or Realistic Stories of Coincidental Times”, such as the artist’s first exhibition, consists of a collection in which his strong relation with symmetry is in the forefront and which includes stories that he came across accidentally.

Conveying through his photographs scenes, which are far from being fictional but are perfect at the same time, from many cities, Istanbul being in the first place, the artist continues to observe and work on cultural and social topics in different geographies.

THE NAME OF THE PERFECT FORM: SILENT TIMES

Ali Bilge Akkaya’s new exhibition “Two or Realistic Stories of Coincidental Times” presents a both content-wise and visually deepened extension of the photographs in his first solo exhibition. Akkaya’s photographs basically serve two different missions: First of all, the artist’s desire to reach aesthetic perfection attracts notice; secondarily, he is after stories with which he can touch the audience’s inner world. Avoiding to constrain his works to a topical framework on course to reach the optimum visual, the artist prefers to make use of the positive effects of life’s versatility on his creativity. Randomness enables an organic relation between the audience and the photographs and thus people tend towards different emotional experiences by finding a trace of themselves in each shot. Instead of creating a setup out of thin air, the artist prefers to bring together the audience and a natural moment extracted out of the flowing time. Akkaya’s photographs are a product of neither an emotional degeneration nor an overwhelming arrangement; these works are on the track of truth, presenting neither more nor less of what there is.

Akkaya, who prefers to photograph extraordinary details of ordinary spaces, realized the works in the exhibition in Istanbul, Gaziantep, Denizli, Göreme, Nevşehir, Sofia, Kiev, Rhodes and London. The artist, who is in search of a universal language, aims at telling the story of his audience, beyond expressing himself, through the people that his photographs are based on, in addition to creating a mutual communication space through geometrical arrangements in his photographs.

While each work has a consistent integrity of meaning in itself, one feels the silent and melancholic bond between the works throughout the exhibition and the works also collectively indicate a single language. Lonely figures, which give the impression of being lost in the entirety of the perfect form, lead the audience to reflect upon the equation of looking-seeing-perceiving. In this way, the multiple layer observed in the photographs deepens the sight and perception in addition to drawing us into itself. Akkaya’s photographs aim at making his audience ask many questions through the contrasts that he presents both in terms of form and content. The main aim of the artist, who is in search of visualizing the right moment is that, people can write their own stories via his photographs. 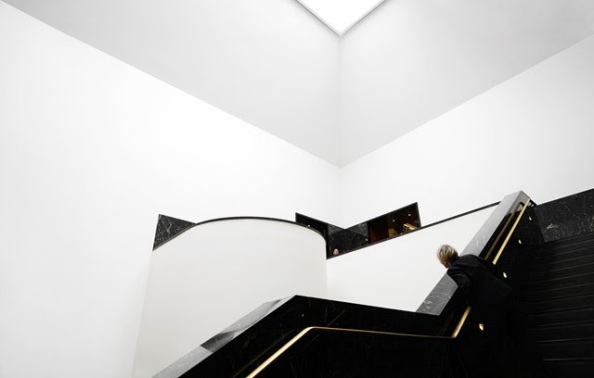 Born in 1988 in Istanbul, Ali Bilge Akkaya studied Industrial Design at the Yeditepe University and the Central Saint Martins College of Art and Design. He became known as a designer and participated in projects that brought together design and sculpture. The artist’s relation with art led to his professionalism in photography and he proved his success in this field with his first solo show in 2015 at x-ist, while he participated in the fairs Contemporary Istanbul’15 and Contemporary Istanbul’16 as well as in group exhibitions during this period.