Circa 1970 presents paintings, drawings, prints, photographs and sculpture from the Studio Museum’s collection. The featured works, all made between 1970 and 1979, reflect the historical, socio-political and cultural landscapes of the decade. Recent, key gifts to the Studio Museum’s permanent collection of artworks by McArthur Binion, Robert Blackburn and David Hammons conceptually and formally drive the exhibition’s examination into this rich decade.

Circa 1970 is organized by Lauren Haynes, former Associate Curator, Permanent Collection, at The Studio Museum in Harlem and now Curator, Contemporary Art, at Crystal Bridges Museum of American Art.

This new presentation in the VideoStudio series offers three videos that explore the formation of identity through cultural exchange. Works by Theo Eshetu, Ezra Wube and Zineb Sedira depict complex European and African interactions in the context of slavery, colonialism and contemporary immigration. In these videos, marketplaces and ports from Germany to Algeria to Ethiopia act as sites for the negotiation of value and identity.

The Window and the Breaking of the Window
Exhibition: 17. Nov 2016 – 5. Mar 2017
organized by Amanda Hunt, Associate Curator.
https://www.studiomuseum.org/exhibition/the-window-and-the-breaking-the-window

Pope.L
Black People Are the Window and the Breaking of the Window, 2004
Pen and marker on paper, 12 1/2 × 10 in.
The Studio Museum in Harlem; Museum purchase made possible by a gift from Barbara Karp Shuster, New York  2005.4.2 Photo: Marc Bernier

Since its founding in 1968, the Studio Museum has exhibited work by black artists committed to bearing witness to acts of protest. Now, in an exhibition that takes its name from one of Pope.L’s “Skin Set” drawings, Black People Are the Window and the Breaking of the Window (2004), the Studio Museum provides a focused look at current and historical expressions of protest through works of art primarily drawn from the Museum’s collection. The Window and the Breaking of the Window includes work by Devin Allen, Alice Attie, Deborah Grant, Steffani Jemison, Kerry James Marshall and more.

The Window and the Breaking of the Window is organized by Amanda Hunt, Associate Curator.

Ron Tarver A Ride by North Philly Rows, 1993
Archival ink jet print, 28 × 30 in. Courtesy the artist
Mention the word “cowboy,” and the image that most often comes to mind—from American paintings, vintage films and television shows—is a lone ranger astride a noble white horse overlooking the plains of the Wild West. The exhibition Black Cowboy is a contribution toward overcoming the historical omission of African-American communities with long histories of keeping and training horses, and toward demonstrating that their tradition is alive and well today. Visitors to the exhibition will find cowboys in unexpected locations—riding down a busy city avenue, for example—or in complex situations, such as a rodeo held within the confines of a state prison. The images will show that African-American children and women, too, can take on the aura of this figure, who symbolizes our country’s independence and stoic pride. Black Cowboy expands our idea of what constitutes an American icon and legacy, and complicates a narrative that has been tightly woven into our popular culture.
Black Cowboy is organized by Amanda Hunt, Associate Curator.
Harlem Postcards Fall/Winter 2016–17
Gail Anderson, Nayland Blake,
Zoë Buckman and Curtis “TALWST” Santiago
Exhibition: 17. Nov 2016 – 5. Mar 2017 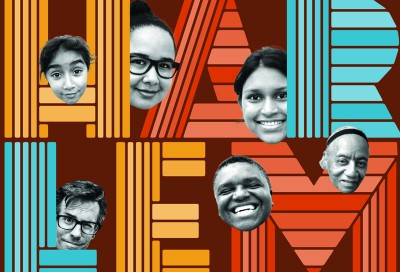 Harlem is about family and all of the many intertwined cultures that provide richness and texture. I redrew a Jazz Age–era typeface and added my own family and friends to the mix, including my ninety-six-year-old Aunt Pearl, who lived in Harlem when I was a kid. The art serves as a poster for both old and new Harlem, and makes a subtle nod to the neon signs that lit up clubs and theaters in days gone by.

As a child, I was taught that leaving a hat on the bed is unlucky, and that I shouldn’t wear yellow. But I’ve always loved to swim in the summer style of New York’s street vendors, so when I saw this hat I couldn’t resist.

In the winter of 2012 in Harlem, Zoe Buckman had a loaded encounter with a Hindu spiritual leader that prompted her to write a poem entitled “Swami-ji.” Here Buckman revisits the piece, but this time explores the relationship between sculpture and written text by superimposing an excerpt from the poem onto a gynecological examination table from the 1800s that she has reupholstered with vintage lingerie. This work is part of her ongoing series “Mostly It’s Just Uncomfortable,” her response to the recent attacks on Planned Parenthood in the United States—attempts curtail women’s access to sexual health and their right to choice. 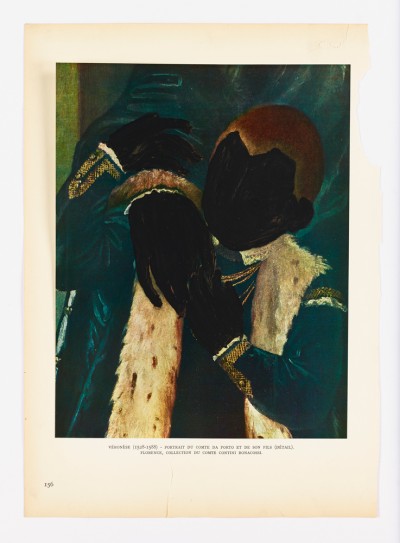 Curtis “TALWST” Santiago Every Saturday,
Father and I Would Go Get Lined Up, 2016 Gouache on found image

This work appropriates a detail of Paolo Veronese’s 1552 Portrait of Count Giuseppe da Porto with his Son Adriano, which depicts both the loving embrace of father and son, as well as a Italian aristocracy and excess. TALWST’s interest in Renaissance imagery stems from the erasure and whitewashing of black historical figures such as Saint Maurice and Saint Jerome. In this work, the artist literally paints over the work of the great master to reclaim this violent act through a subversive gesture. The complete blackness results in a total removal of the previous identity, but it is also an act of reclamation. The appropriated painting displays that positive images of white fatherhood have saturated the Euro-Western consciousness since the Renaissance. Today they are perpetuated and upheld by modern media. No comparable mainstream discourse exists with regards to black fatherhood, which is too often depicted through damaging stereotypes. This work is inspired by the artist’s own memories of weekends spent with his father. Thus he seeks to depict an alternative to the prevalent historical narrative through physically rendering the figures black.

******
Thelma Golden,
Director and Chief Curator of The Studio Museum in
Harlem, today announced five new exhibitions and
projects opening November 17, 2016: Circa 1970, Black
Cowboy, VideoStudio: Meeting Points, The Window and
the Breaking of the Window and Harlem Postcards Fall/ Winter 2016–17.