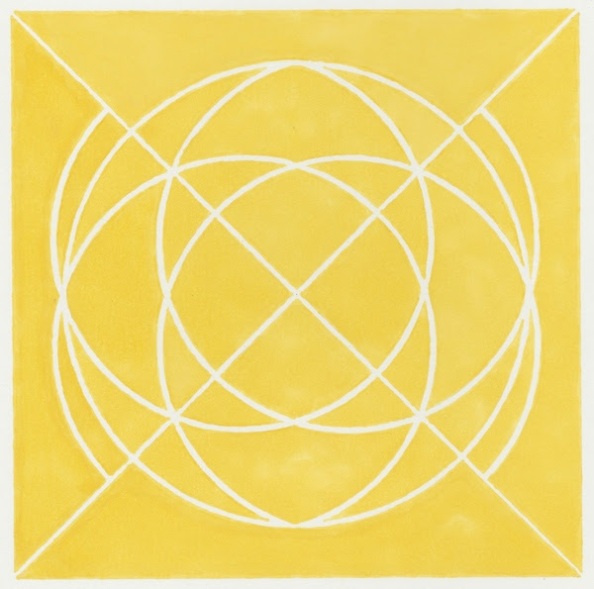 The exhibition Lucinda Childs – Sol LeWitt is part of the Lucinda Childs retrospective due to take place this autumn at the Galerie Thaddeus Ropac, the Centre National de la Danse, and in the Festival d’Automne. The exhibition at our space in Pantin highlights the parallel development of the graphic methods of these two artists during the 1970s. Their collaboration in the piece Dance (1979) gained widespread attention, but their affinity had begun to grow at the beginning of the decade with ideas in common about drawing, seriality and movement.

In 1979, Lucinda Childs began rehearsals for Dance in New York. The piece was a turning point in the choreographer’s career; it was a move away from the alternative spaces in which she had presented her pieces over the previous two decades. Working with Sol LeWitt and composer Philip Glass, she developed a show that explored the specificities of the theatre system. Sol LeWitt’s contribution was to create the only film installation in his oeuvre. A 35mm film shot a few months beforehand was superimposed over the live dance, on a transparent screen covering the entire stage. In a complex, edited version of the same dance, this film multiplied the points of view of the choreography, while it was simultaneously executed in real-time by the dancers. The exhibition at Pantin has benefited from an exceptional loan from the Whitney Museum, New York, of one of the original choreographic scores of Dance #4 (1979); it was donated to the Whitney Museum by Lucinda Childs.

The choreographer’s archives, which have never been exhibited before, trace the development of her choreographic language in the 1970s, using more than a hundred pieces of graphic material. These documents operate as an echo to Sol LeWitt’s Wall Drawing #357, which is a development of the arc motif on the walls of the gallery. The arc, along with the straight line and the diagonal, constitute the formal repertoire of Lucinda Childs’s minimalist dances.

For the five dances that initially made up Dance, Lucinda Childs used a procedure, invented in 1973, involving a diagram from which she generated the choreographic score. In the 1960s, Childs had drawn sketches delineating pathways of movement, but in the 1970s she turned towards compositions involving ordinary movements strung together serially and repetitively. Walking and changes of direction thus became the essential raw material of her dances and, from then on, the pathways of movement sketches would be integrated into the score of the piece.

At their first meetings for the creation of Dance, Sol LeWitt and Lucinda Childs exchanged diagrams of the dances (probably by fax). The artist would then attribute a primary colour to them. The central place of diagrams in the elaboration of the dances stemmed from the methodology Lucinda Childs had begun to adopt in 1973. She no longer tried to work out the dancers’ pathways beforehand; a graphic machine, a drafting tool, now generated the lines. It was only later, during rehearsals, that the performers’ pathways were individualised. At the heart, then, of the construction of the choreography we find the same methodology as Sol LeWitt developed in his serial work of the 1970s and 80s. In LeWitt’s wall drawings, and in Lucinda Childs’s choreography, the notion of series enables them both to push the graphic logic of each motif to infinity.

Among the documents assembled in this exhibition, a great deal of the correspondence between Sol LeWitt and the choreographer is also displayed. It is possible to follow the drawn and stamped diagrams that the artist made in Murano, Rome and Beijing in response to the choreographer’s diagrams of the dances. On the back of one of these postcards, there are some flicker-pictures; they are from a photographic plate entitled Man performing headspring, a flying pigeon interfering, part of Eadweard Muybridge’s study of animal locomotion, in this case photos illustrating the different stages of a headspring. Photographed head-on, the movement looks incoherent, whereas, in profile, the photos reveal the sequential logic inherent in ordinary movements. The seriality of the two artists’ work was thus constructed as much from graphical processes as from capturing the ordinary movements that animate human locomotion and, in this respect, Eadweard Muybridge is a reference shared by both of them.

The execution of Wall Drawing #357: A 12″ (30 cm) grid covering the wall, which Sol LeWitt created in November 1981 in New York and which exploits the arc motif, will be realised by an artist from the Sol LeWitt Foundation, who will work for over three weeks on a white chalk realisation of the drawing on a black-painted wall nearly 25 metres long. The last day of drawing will coincide with the opening of the exhibition on Saturday, 24 September 2016. The Wall Drawing will be wiped off on 7 January 2017, the last day of the exhibition. This will also take place in the presence of an audience.

with the Festival d’Automne

In the context of the exhibition Lucinda Childs, Nothing Personal, 1963 – 1989 organized with CND Centre national de la danse and Festival d’Automne in Paris

Like Loading...
Dear friends, curators and fellow artists,
I am glad to share with you some exciting news regarding my current and upcoming exhibitions this September. If you happen to be in the neighborhood, feel free to have a glance. In addition, I would like to share with you the wonderful news that my work ‘Seeds’ has entered the Israel Museum’s collection.

‘Seeds’ – now a part of the Israel Museum’s collection.

I am proud to take part in the 56th October Salon, ‘The Pleasure of Love’, where I will exhibit two of my joint works with Nezaket Ekici; ‘Lublin Beach’ and ‘Salt Dinner’ both are part of our ongoing joint project- ‘In relations’.
The exhibition is curated by David Elliot.
September 23rd through November 6
Belgrade Culture Center
Belgrade, Serbia 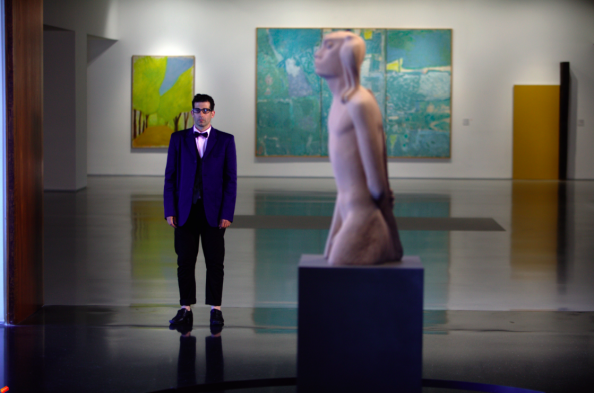 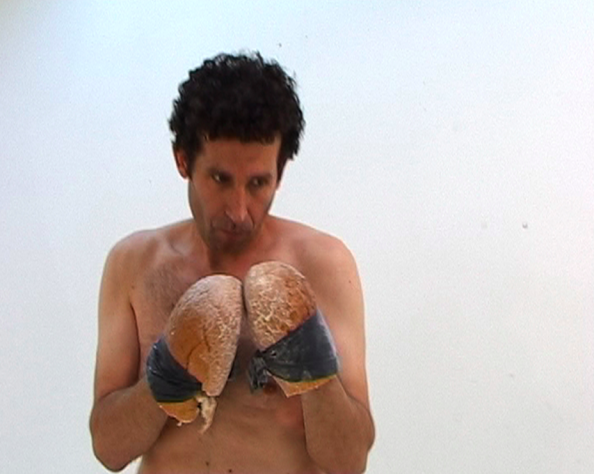 I am featured in three different exhibition at the Museum of Contemporary Art in Krakow.
As part of the group exhibition ‘The Sea’ I will be exhibiting ‘Salt Dinner’ (a joint work with Nezaket Ekici) which depicts Nezaket and I dinning at the midst of the dead sea waters. The project explores time, space, culture and religion.
At the exhibition ‘Medicine in Art’ I will exhibit ‘Frog Test’ which received the distinguished award of the Jerusalem Video Art & Experimental Cinema 2009.
My works ‘The Boxer’ and ‘The Curator’ are part of the the museum’s collection.
*The Sea – October 21st through March 26
*Medicine in Art – through October 2nd
*Collection – ongoing
Museum of Contemporary Art in Krakow
Krakow, Poland 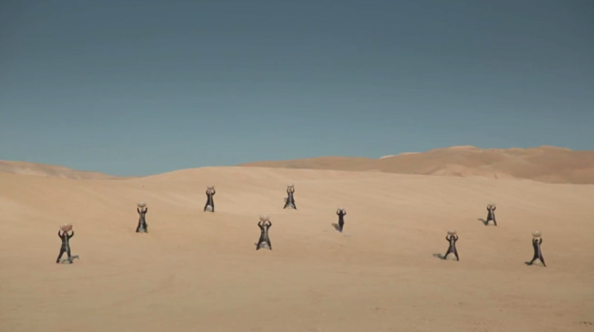 As part of the 5th Radial Festival in Berlin, which explores the current issue of migration and refugees, I will exhibit ‘Sand clock’ (joint video work with Nezaket Ekici) which depicts performers standing in the desert as sculptures, appearing as human sand clocks. The work conveys a refreshing perspective as to the desert’s meaning as well as landscape.
October 21st through October 23rd
I.D. Festival Berlin
Berlin, Germany

At VideoMedeja Festival I will be exhibiting ‘King of Falafel’. The work takes place on the moon and depicts the opening of a new Falafel stand. The work deals with the Israeli cultural symbols manifested by various food rituals.
October 21st through October 23rd
International VideoMedeja Festival
Novi Sad, Serbia

At the group exhibition at the Haifa Museum of Art I am exhibiting my work ‘Leap of Faith’ which criticizes several characteristics imbedded in humans- fear of failure and of social criticism as well as human ambition to obtain glory at all cost.
Through January 2017
Haifa Museum of Art
Haifa, Israel
Hope that you have an opportunity to catch one or more of my exhibitions.
Wishing you all a happy new year,
Shahar Marcus 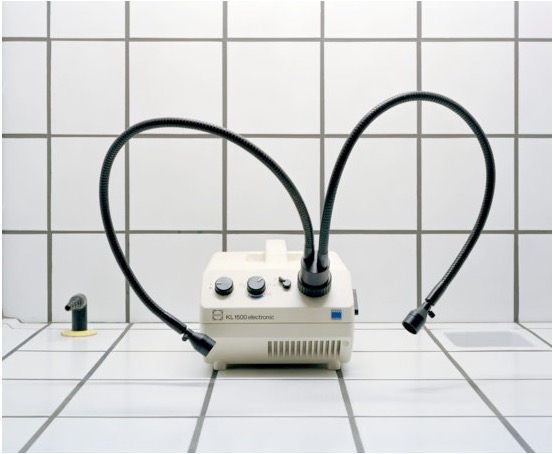 Barbara Kruger Exhibition Explores Artist’s Standout
Profile Works at National Gallery of Art, Washington,
September 30, 2016–January 22, 2017
A focused exhibition featuring the work of American artist Barbara Kruger (b. 1945) will reopen the East Building Tower Gallery after nearly three years of renovation to the space. Inspired by the Gallery’s recent acquisition of Kruger’s Untitled (Know nothing, Believe anything, Forget everything) (1987/2014), the exhibition comprises related images of faces and figures in profile over which Kruger has superimposed her striking phrases and figures of speech. The distinctive direct address of Kruger’s texts (using active verbs and personal pronouns) confronts viewers straight on, contrasting with her selected images of side-glancing figures, receiving and averting the audience’s gaze. The results are arresting conceptual works of visual power and wit.
Film Program
Barbara Kruger Selects
December 3 – 31
http://www.nga.gov/content/ngaweb/calendar/film-programs/kruger-selects.html 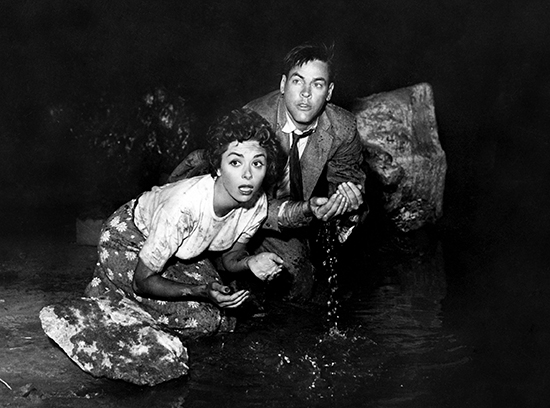 Barbara Kruger is a conceptual artist who, beginning in the early 1980s, empowered the female subject through a resistance to the gaze. Her art developed at a time when the critical discourse questioning power structures dominated visual practice. An investigation into the way in which viewer identity is constructed and how meaning is embedded and disseminated through mass media led artists such as Kruger to challenge the dynamics of what it means to look and be looked at. This extended naturally to film and television. Indeed, she wrote as a critic on these topics for Artforum. Kruger’s concerns have taken on increasingly broader meaning, to explore the nature of human relationships. In conjunction with the exhibition In the Tower: Barbara Kruger, the artist has selected four favorite films for this series.
Gallery Talks
In the Tower: Barbara Kruger
October 4, 5, 6, 7, 8, 10 and 11 | 2:00
October 9 | 1:00
(50 minutes)
East Building Diane Arkin
Lectures
Introduction to the Exhibition
In the Tower: Barbara Kruger
Sunday, October 23, 2016 | 2:00 p.m.
with: Exhibition curator Molly Donovan, associate curator,
department of modern art, National Gallery of Art,
Teacher Workshop
Barbara Kruger: Images, Text, and Social Critique
Organized by the National Gallery of Art, Washington
Sponsors:
The exhibition is made possible by The Tower Project of the National Gallery of Art.
Passes:
Admission is always free and passes are not required

Kruger, a professor in the art department at UCLA since 2006, has long maintained a commitment to teaching as a part of her practice. In December she will visit the National Gallery to talk with high school art students from DC Public Schools. The students will participate in education programs throughout the fall with Gallery educators, studying Kruger’s work in the Tower exhibition and exploring the construction of identity in artworks across the museum’s collection. This program marks the first time that an artist with an exhibition currently on view has worked with local students at the Gallery, and highlights Kruger’s commitment to teaching and inspiring the next generation.

As a former film and television critic for Artforum, Kruger has acknowledged a deep interest in the moving image. In December the Gallery will feature an extensive film series, “Barbara Kruger Selects,” chosen by the artist around the theme of the show and the artist’s methodologies.

Kruger’s higher education began at Syracuse University and continued at Parson’s School of Art and Design in New York, where she studied with Diane Arbus and Marvin Israel in 1966. Beginning in 1967 Kruger worked as a layout editor at Condé Nast for twelve years, including posts at Mademoiselle, House and Garden, and Aperture. In 1969 Kruger began to make her own art while also writing poetry and film and television reviews. A decade later she had developed her “picture practice” with photographs repurposed from 1940s–1970s manuals and magazines that she overlaid with her own texts or commonplace phrases. The completed works alter her found materials, inscribing her admonitions and questions over the images to stimulate and rouse the viewer from passive acceptance.

Kruger’s background in design is evident in these works, for which she is internationally renowned. Owing to her interest in the public arena and the everyday, Kruger’s work has appeared on billboards, bus cards, posters, T-shirts, matchbook covers, in public parks, and on train station platforms. Recent work has included immersive installations of room-wrapping images and text, and multiple-channel videos. 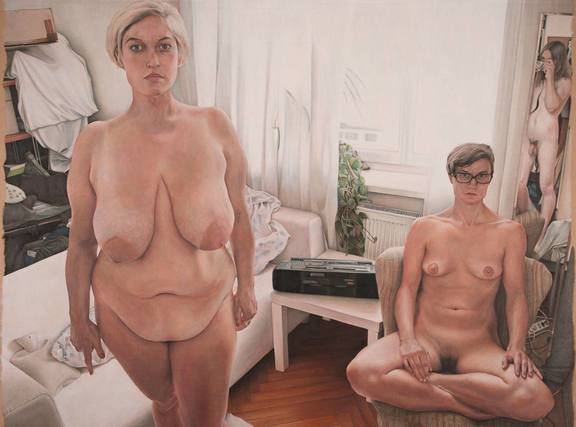