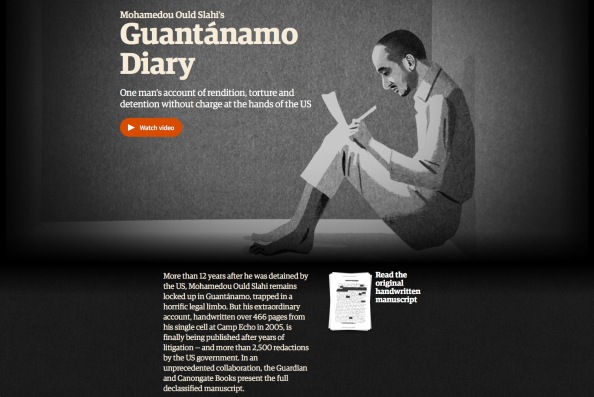 More than 12 years after he was detained by the US, Mohamedou Ould Slahi remains locked up in Guantánamo, trapped in a horrific legal limbo. But his extraordinary account, handwritten over 466 pages from his single cell at Camp Echo in 2005, is finally being published after years of litigation — and more than 2,500 redactions by the US government. In an unprecedented collaboration, the Guardian and Canongate Books present the full declassified manuscript.

Since 2002, Mohamedou Ould Slahi has been imprisoned at the detainee camp at Guantánamo Bay, Cuba. In all these years, the United States has never charged him with a crime. Although he was ordered to be released by a federal judge, the U.S. government fought that decision, and there is no sign that the United States plans to let him go.

Three years into his captivity Slahi began a diary, recounting his life before he disappeared into U.S. custody and daily life as a detainee. His diary is not merely a vivid record of a miscarriage of justice, but a deeply personal memoir – terrifying, darkly humorous, and surprisingly gracious. Published now for the first time, Guantánamo Diary is a document of immense historical importance.